The peace conference, to be held either in Seoul or the southern city of Busan in December, will bring together the ministers from 22 countries, including the United States, Britain, Canada and Turkey, to discuss ways to develop their friendly relationships and promote peace, according to the Ministry of Patriot and Veterans Affairs (MPVA).

Around 1.95 million people from 22 countries took part in the war, where North Korean troops, backed by the Soviet Union, invaded the South. Of them, 37,902 were killed and 103,460 wounded, according to government data.

"It is part of our main projects this year to repay veterans for their sacrifice. We will continue efforts to remember and share lessons learned from the war and seek ways to contribute to global peace and prosperity," Vice Minister Lee Nam-woo told reporters. 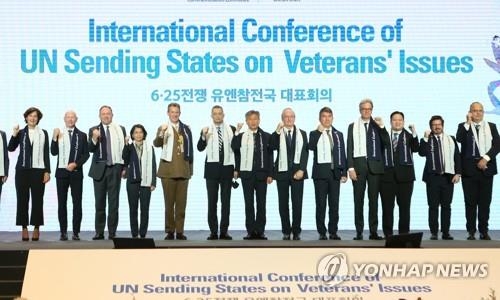 Another key policy plan by the ministry this year is the repatriation of the remains of three Korean independence fighters from overseas, according to the ministry.

It did not disclose who they were, simply saying their remains are respectively buried in China, Europe and Central Asia, and consultations are under way with bereaved family members to finalize the repatriation plan.

In addition, the ministry vowed to continue work with Kazakhstan to bring home the remains of legendary Gen. Hong Beom-do from the Central Asian country, according to ministry officials.

His remains were supposed to be returned home last year on the occasion of the Kazakh president's planned visit to South Korea, but the plan has been delayed due to the COVID-19 situation.

Hong was general commander of the Korean independence army during the 1910-45 Japanese colonial rule and claimed victories in battles against Japanese forces in Manchuria. He died in Kazakhstan in 1943 and remains buried there.

South Korea launched the repatriation project of the remains of former independence fighters from abroad in 1975. Since then, the remains of more than 140 people have arrived on home soil, according to government data.

The ministry also said it will continue to strive for a joint project with North Korea to retrieve the remains of revered independence fighter An Jung-geun.

An's remains are thought to be at a prison site in Dalian, northeastern China, where he was executed for assassinating Hirobumi Ito, the first Japanese resident-general of Korea, in 1909.

From 2005-2007, the two Koreas formed a joint inspection team to carry out an onsite survey in Dalian, but no progress has been made due to chilled inter-Korean ties.

As part of efforts to express gratitude to international veterans, the ministry vowed to launch diverse projects, such as inviting them to South Korea.

The ministry will carry out building a memorial wall in Washington to commemorate U.S. veterans who fought in the Korean War without a hitch to complete the construction by 2022 as planned.

For veterans and patriots at home, the ministry will increase monthly payments and other benefits this year, the officials said. 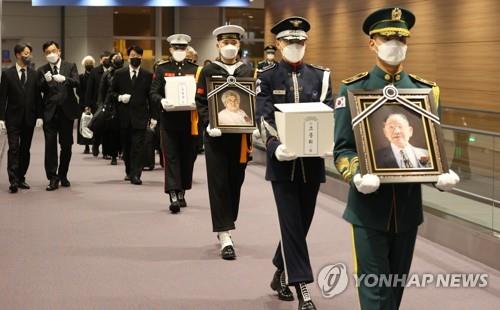