"I am excited to announce that I've joined @StateDept as Deputy Assistant Secretary for East Asian & Pacific Affairs," Pak wrote on her Twitter account, also congratulating Blinken on his appointment.

"What an honor to be able to serve the American people again in this new capacity and work with the dream team @USAsiaPacific," she added.

Pak had served as a deputy national intelligence officer at the National Intelligence Council before joining the CIA in 2016 as a portfolio manager at the spy agency's East Asia and Pacific Mission Center.

She has been working as a senior fellow at the Washington-based Brookings Institution think tank after leaving the CIA in 2017.

The Korean-American is one of the better known North Korea experts in the United States.

As new deputy assistant secretary for East Asian and Pacific affairs, her job will likely include dealing with North Korea.

Meanwhile, the department's East Asian and Pacific bureau is currently led by another American of Korean descent, Sung Kim, who was named acting assistant secretary as of last Wednesday, the day Joe Biden took office as president.

It was not clear whether Kim was temporarily filling the post vacated by David Stilwell, who was appointed by former President Donald Trump.

The State Department said it had no additional administrative announcements to make when asked to confirm if Kim has been formally nominated to the post. 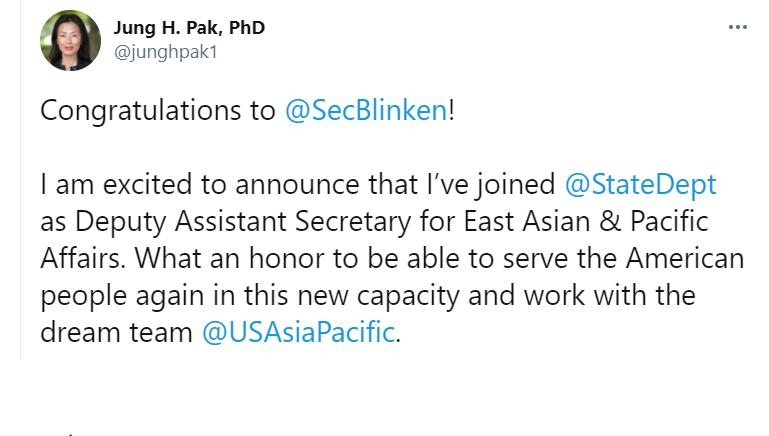