SEOUL, Jan. 27 (Yonhap) -- The government and the ruling party's push for legislation on compensating small businesses for their losses incurred by COVID-19 restrictions has picked up steam in recent days after President Moon Jae-in called for institutionalized compensation for them.

But how to finance the huge budget needed to compensate the victims remains a major stumbling block to tackle, along with the potential controversy over how to set the standards for the compensation and measure the size of losses incurred by each business.

On Wednesday, the ruling Democratic Party (DP) officially began an internal process to enact a law on financially compensating the self-employed and small merchants ordered to suspend or cut down business operations under state-imposed social distancing requirements.

The DP had a plenary party meeting via a video link to collect opinions of its lawmakers on the matter and will hold another meeting Thursday to discuss details of the legislation plan. 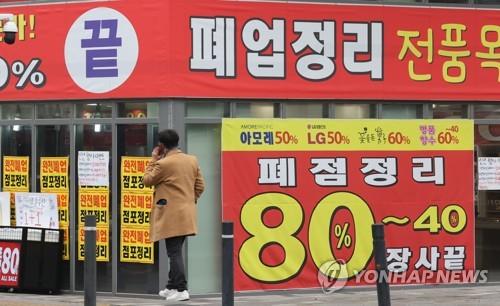 The move came two days after Moon instructed the government to review ways to institutionalize compensation for those people "within a certain range that (state) finance can afford," bringing to an end an apparent discord within the government.

The call represented Moon's first public message on whether relevant legislation is necessary, which has emerged as a hot political issue ahead of the April 7 mayoral by-elections in Seoul and Busan.

"Within the limit of the national financial capacity, the related government bodies should review (the legislation) through sufficient consultation, especially in consideration of the opinions from the affected businesses themselves," Chung instructed Finance Minister Hong Nam-ki during their meeting Tuesday.

The government and the ruling party began discussing the compensation issue two weeks ago and the prime minister first instructed the finance ministry last Thursday to take measures to legally enable compensations for the victimized business owners.

Owners of cafes, fitness studios, karaoke rooms, cram schools and other businesses took a crushing blow as they have been ordered to close or limit business operations as part of the government's social distancing guidelines aimed at containing the latest wave of mass coronavirus infections.

But after the repeated call from the prime minister, Hong explained that the finance ministry has recognized the need to institutionalize compensation measures and had been reviewing it before the president delivered the instructions.

"We will move forward with the measures by discussing the specifics thoroughly with the ruling party," Hong said. 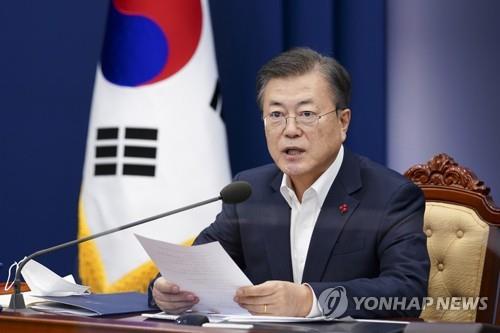 Currently, several related bills are pending at the National Assembly, including a proposal by DP lawmaker Min Byoung-dug, which calls for redeeming 70 percent of sales losses suffered by businesses ordered to close. It also requires compensations to cover 60 percent of the sales losses inflicted on businesses whose operations were restricted as part of social distancing.

But compensations such as those proposed by Min would detrimentally cripple the state budget spending and inflate government debt, especially after the government drew up four rounds of COVID-19 response extra budget last year, said critics.

A rough calculation indicates that the country may need nearly 25 trillion won (US$22.6 billion) each month to fulfill the compensations under Min's legislation proposal. The accumulated government expenditure would reach up to 100 trillion won if the compensation is to cover four months.

As the debate on the compensation scheme continued, Kim Chong-in, the leader of the main opposition People Power Party, renewed a proposal to set aside a 100 trillion-won budget to deal with the coronavirus aftereffects.

Kim's proposal calls on the government to reconfigure its 558 trillion-won budget for this year to reserve the 100 trillion-won spending for the coronavirus response.

"The economy would be able to normalize only when the president, with a stronger determination, thoroughly overcomes this crisis," the main opposition party leader said during a party event Tuesday.

Industry insiders and experts, meanwhile, agreed that the envisioned legislation would help lay out the legal grounds to compensate for private losses incurred by public health protection measures against COVID-19 as well as potential outbreaks of other contagious diseases in the future. But the legislation needs to leave the specifics of the compensation, such as its scope or coverage, in the hands of government bodies in charge, they noted.

"Considering other situations following the COVID-19 pandemic, a standing law, rather than a temporary act, would be better in laying the ground and system for compensations," professor Lee In-ho of Seoul National University said.

"Related government bodies can then step in to draw up detailed compensation schemes in accordance with the situational (need)," he noted.

Apparently conscious of the controversy over the legislation initiative, the DP has veered toward an option that would leave it up to government bodies to decide details regarding who to compensate and how much.

"It would be more effective administratively to let (government bodies) decide the specifics through enforcement ordinances," the party's policy committee chief Rep. Hong Ihk-pyo said during a radio interview Monday.

"(Through the legislation) the party is considering the (compensation) payment before the end of March or early April at the latest," he added.