But in South Korea, where 80 percent of all homes are apartments or villas, where several families live in individual flats in a shared building, having a noisy neighbor can be more painful than you think.

For Kim Ha-jung, things began when her new neighbors at a Seoul apartment building moved in half a year ago.

"I started to hear little kids stomping and jumping or someone moving heavy objects even late at night, after around 10 p.m.," she said, "Sometimes they even run the vacuum. It's really annoying when I hear those sounds when I'm going to bed."

While the office worker had to bear the unwelcome sounds at night, it was the pandemic that made her realize those sounds also occur during the day.

Noise disputes have long been an issue in a country where only around 20 percent of housing types are individual, stand-alone houses, according to a 2019 tally by Statistics Korea. The percentage of such homes is even rarer in the crowded and expensive capital, where the portion halves to around 10 percent.

In fact, enhancing "safety in daily life," such as reducing light and sound pollution, like noise disputes between neighbors, was one of President Moon Jae-in's 100 policy goals suggested in 2017, reflecting how many South Koreans are exposed to noise disputes in everyday life. 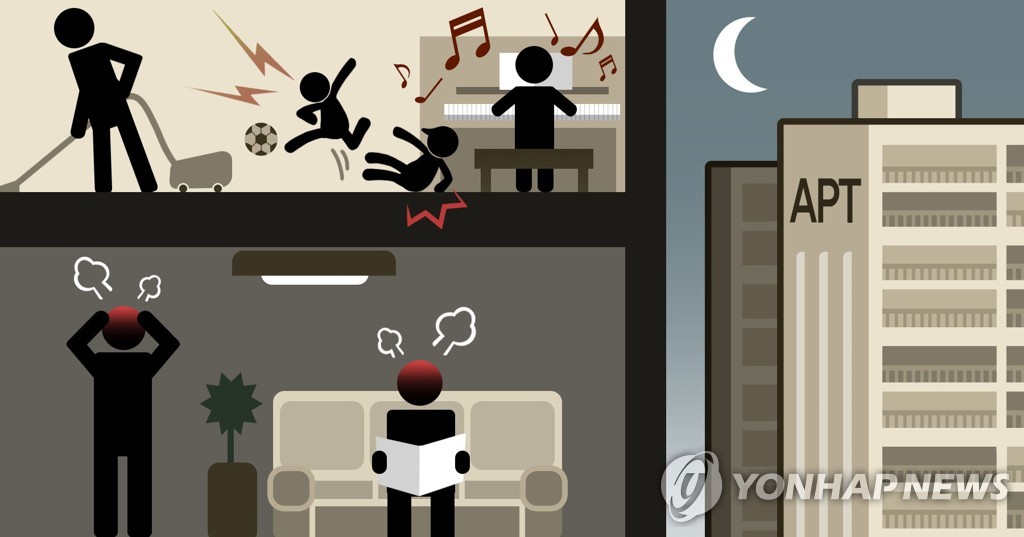 Like Kim, many have become aware of noisy neighbors more during the pandemic as it has forced people to stay at home longer and sometimes even work from home. For some, it also meant bearing days of house refurbishing projects that accompany a ruckus of drilling and tearing down walls and tiles.

"I mean, OK, we live in a shared building and even if it was noisy, I tried to understand kids running at night, my neighbors fighting and mobile phone alarms ringing since my neighbor couldn't wake up in the morning," Seoul resident Lee Ju-hyung said.

"But the noise became more obvious since my company shifted to work-from-home amid the COVID-19 outbreak. On some days, there were people fixing their homes, and I had nowhere to go. It was terrible, working through that noise," she said.

Probably worsened by the pandemic blues, public anger erupted when a comedian's family publicly received a complaint from a downstairs neighbor who claimed to have repeatedly asked the family to refrain from running at home. The family made headlines for days and became the target of social media attacks when past posts showed them playing baseball or working out at home, without any floor mats to ease the noise.

Similarly, the health ministry had to release an official apology after a campaign video encouraging people to overcome the pandemic instead triggered fury. The video showed a family energetically dancing in an apartment, prompting some to joke that it was ironically urging people to bully their downstairs neighbors.

On YouTube, the second most-searched keyword for these kinds of disputes is "revenge," with scores of videos sharing ways to hit back at noisy neighbors. Some suggest using woofer speakers, while some shared stories of going to an upstairs flat to jump and stomp.

But it's not always easy for people who live upstairs either. Since the level of noise individuals can endure differs by people, and there is no strict threshold on what defines noise, some people say they just try to be extra careful to not anger their downstairs neighbors.

"I've been lucky and never got a complaint from my neighbor. But once or twice a year, I leave fruit or rice cakes at my downstairs neighbor's front door and leave a message saying I'm sorry that my children are noisy," said Cho Eun-soo, a mother of two children.

"At the same time, I always tell my kids to think about our neighbors. I probably warn them around 10 times a day on average," she said, "With the pandemic, they are staying indoors longer and even getting a bit fat, and I feel sorry for always nagging them, but I hope they grow up to be considerate people."

On online communities, some share stories of how they spent millions of won to install floor mats across their entire home or decided to move to a first-floor space to escape from neighbors who are too sensitive about noise. 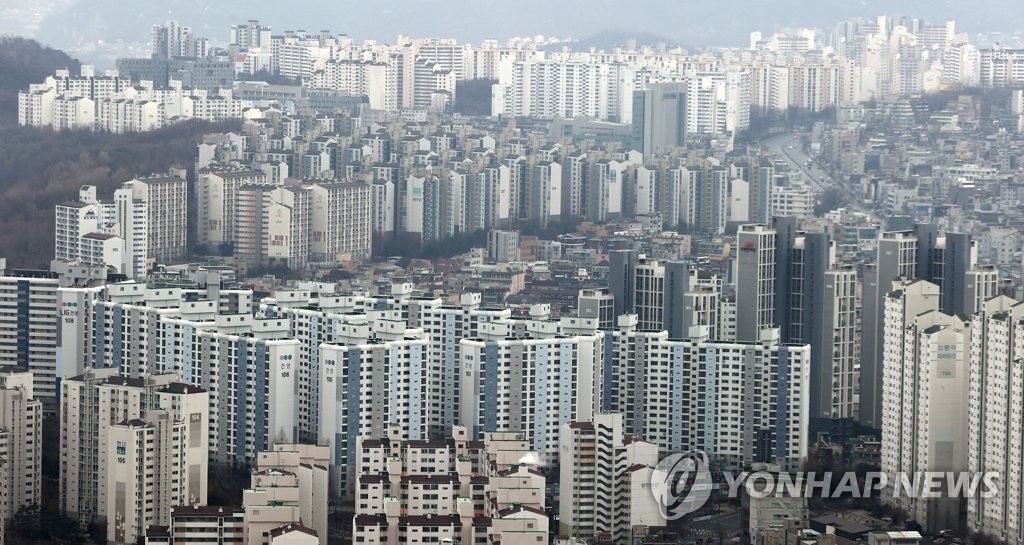 With complaints over noise disputes growing recently -- the number of relevant phone consultations tallied by the government jumped 60 percent on-year in 2020 -- the government has begun to take long-term actions that could help mitigate the issue.

Last week, the environment ministry unveiled a five-year plan aimed at improving the quality of life by taking a more active stance against noise pollution. The government said it plans to reduce the number of people suffering from noise pollution to 10 percent or less by setting guidelines on noise levels and tightening standards in the longer term.

"The focal point is to show the need to manage different types of noise by investigating the effect exposure to noise has on citizens' health," said Ha Mi-na, a policy officer at the ministry. "We will bolster policies to improve the quality of life for people and create a serene living environment."

Rep. Yang Kyung-sook of the ruling Democratic Party has also proposed legislation aimed at reducing noise disputes. These include mandating residences establish a self-run mediation committee among residents, as well as asking builders to provide compensation for failing to reduce noise in the construction process. 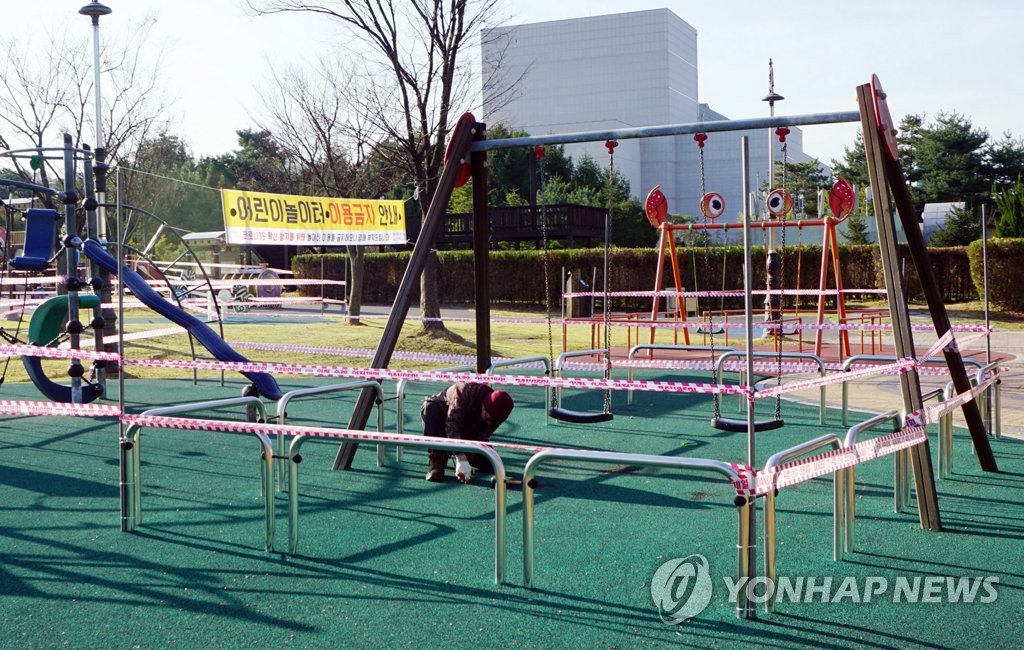 But until those laws are revised and systems are changed, experts say the fastest and most desirable way to resolve disputes between neighbors is to prevent them from growing into bigger brawls.

"After phone consultations with people suffering from noise disputes, what I feel is that resolving it within the golden hour is the most important thing. Noise disputes should finish as noise disputes instead of spiraling into bigger fights that hurt people," said Seo Byeong-ryang, an official at the Korea Environment Corp. that runs a help center on noise disputes.

The help center provides consultation sessions for people having noise disputes and if necessary, conducts home visits to measure the level of noise and help neighbors settle the issue.

Seo stressed that in many cases situations significantly improve when both sides have an "open mind."

"When we visit homes, we ask what their daily schedules look like. For instance, there was a family who had a high school senior who returned home late at night after studying. After the neighbor found this out, they said they could understand the noise until the big exam was over," he said. "If people get to know about each other and open up their minds, usually the problems are smoothly handled. But if they don't, the problem goes on."

Kim and Cho agreed, saying what matters in the end is being a considerate neighbor.

"We all live a hectic city life and don't have much time and energy to get to know our neighbors. But despite that, I think we always have to bear in mind we can be both a victim and a perpetrator and always try to be a bit cautious," Kim said.

"The ideal scenario would be for people to be more considerate and a little bit less sensitive when living in a shared building," the mother Cho said. "But above all, I think we should just try to be sensible by at least thinking that we should try to be quiet at night and not move furniture at late hours. I just hope for a sensible society."