Trading volume was moderate at about 905 million shares worth some 19.4 trillion won (US$17.6 billion), with losers outnumbering gainers 574 to 293. 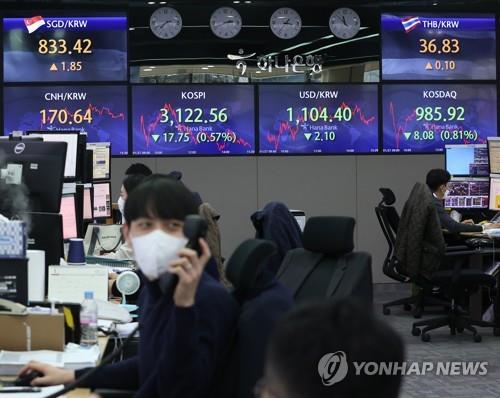 The KOSPI got off to a muted start ahead as investors waited for the results of the U.S. Federal Reserve's policy meeting, and losses widened in the afternoon.

Faster-than-expected recovery in the Chinese economy also raised worries that emerging economies may hasten the tightening of their fiscal policies.

"Foreigners (had bought because they) have been optimistic about (a fast recovery in) South Korea's economy," Eugene Investment & Securities analyst Huh Jae-hwan said.

"But the recent hike in China's short-term interest rate seems to have made them wary," he added.

The local currency closed at 1,104.4 won per dollar, up 2.1 won from the previous session's close.

Bond prices, which move inversely to yields, closed higher. The yield on three-year Treasurys lost 2.5 basis points to 0.982 percent, and the return on the benchmark five-year government bond fell 1.3 basis points to 1.335 percent.