WASHINGTON, Jan. 27 (Yonhap) -- The United States will work with its Japanese and South Korean allies, but also with China and Russia to denuclearize North Korea, the appointee for U.S. ambassador to the United Nations said Wednesday.

Linda Thomas-Greenfield also said the former Donald Trump administration may have failed to rid the North of its nuclear weapons because it tried to go "alone."

"We certainly have to reengage with our allies. Again, this is not something we can do alone," she said in her confirmation hearing before the Senate Foreign Relations Committee.

"I think, one of the biggest failings of the Trump administration is that they did try to go it alone and our allies were left kind of holding the bag," added Thomas-Greenfield. 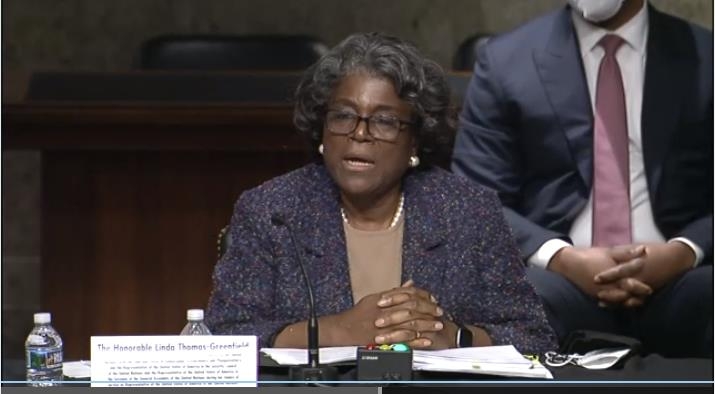 President Joe Biden and his national security team, including Secretary of State Antony Blinken, have repeatedly stressed the need to restore the United States' relationship with its traditional allies, such as South Korea.

The U.N. ambassador nominee emphasized the importance of also working with China and Russia, both considered friends, if not benefactors, of the impoverished North. China alone is said to account for nearly 90 percent of North Korea's overall trade.

"Reengaging with South Korea with Japan, as well as with China and Russia, particularly to push for their respect for a sanctions regime against North Korea, is going to be really important," Thomas-Greenfield told the hearing.

"The locus for those discussions will be in New York at the United Nations, in addition at more high level engagements by the president and the secretary of state," she added.

Biden held a telephone conversation with his Russian counterpart, Vladimir Putin, on Tuesday, less than a week after he took office as president.

Blinken, who took office on Tuesday, already has held telephone conversations with his South Korean and Japanese counterparts, in which he stressed the "continued need to denuclearize North Korea," according to the State Department.