SEOUL, Jan. 28 (Yonhap) -- The chief of a minor opposition party was convicted Thursday of forging an internship certificate for the son of former Justice Minister Cho Kuk.

The Seoul Central District Court sentenced Rep. Choe Kang-wook of the Open Democratic Party to eight months in prison, suspended for two years, on charges of obstruction of business. If the ruling is finalized, Choe would lose his parliamentary seat.

"The defendant's criminal act cannot be taken lightly as it undermines the fairness of the school admission process," the court said. 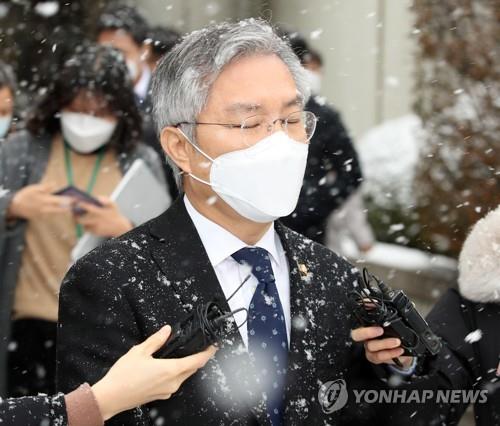 Choe was indicted on Jan. 23, 2020, when he was a presidential secretary. He was charged with issuing a false internship certificate for the former justice minister's son in October 2017 while working as an attorney at a law firm in southern Seoul. The son used the document for admission into two prominent law schools in Seoul.

The Cho family was embroiled in a scandal over alleged academic fraud and dubious investments in 2019. His wife was sentenced to four years in prison last month for fabricating school certificates for her daughter.

Choe denied all charges, claiming Cho's son worked as an intern at his firm. But the court dismissed his argument, based on the testimonies of other officials of the law firm.

The court said the defendant appears to have had the intention to mislead school admissions officers, knowing that the certificate would be used for school applications.

After the ruling, Choe told reporters that he will appeal immediately to reveal the truth.