SEOUL, Jan. 31 (Yonhap) -- The main opposition party called Sunday for a probe into snowballing allegations that the government of President Moon Jae-in attempted to help build a nuclear power plant in North Korea, despite its repeated denial.

Kim Chong-in, the interim leader of the People Power Party (PPP), pressed the government to act quickly to address the suspicions that it conceived the nuclear plant idea for the North when it was enforcing a nuclear phase-out scheme in the South to shift to safer, more sustainable energy resources.

The energy ministry rejected the claims again, voicing concerns that a controversy on the issue was "needlessly" spreading. But the offensive from the opposition party showed no signs of abating.

"Reasonable minds will ask whether the government was trying to trade the construction of a nuclear plant for an inter-Korean summit," Kim said during a party meeting. "The government should explain why an official sneaked into the office a day before the audit and destroyed the files." 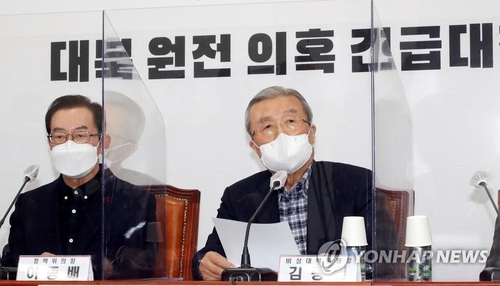 The allegations arose after a local TV station reported that a document about the nuclear power plant idea was among a series of computer files that industry and energy ministry officials were accused of deleting allegedly to cover up their wrongdoing.

The files came to light while prosecutors were investigating the government's decision to terminate the operation of Wolsong-1, the country's second-oldest nuclear reactor.

The computer file at issue triggered speculation that a document that the South handed to the North to present a broad cross-border economic cooperation vision during their summit in April 2018 might have included an idea for a nuclear power plant.

The file is thought to have been produced in May 2018, soon after the first summit between Moon and North Korean leader Kim Jong-un at the inter-Korean border village of Panmunjom in April.

On Sunday, the energy ministry said the file was about one of various policy possibilities discussed at a working level and that the government has never attempted to build a nuclear plant in the North.

"We have confirmed that the claim that the government attempted to build a nuclear power plant in the North is not true," the ministry said.

"In the preface, the document clarifies that it is a material for internal review, not an official position of the government," it added.

Among the policy possibilities mentioned in the document was an abstract idea about constructing a nuclear power plant in the South and transmitting to the North electricity generated from the plant, the ministry said.

The ministry pointed out that the document described limits in pushing for the policy idea due to high uncertainty over the possible outcome of nuclear talks between the U.S. and the North.

"The document came to an end without an additional review and without being unveiled to the outside audience," the ministry said.

The unification ministry also dismissed the allegations that in the economic cooperation vision presented to the North during the 2018 summit, there was something related to a nuclear power plant.

"There were no words like 'nuclear power plant' or any related content whatsoever in the new economic initiative for the Korean Peninsula," the ministry said in a statement sent to reporters.

The ruling Democratic Party strongly rejected the speculation as "groundless."

A source from the ruling camp said that a document about an idea of a power plant, which was given to the North during the 2018 summit, was regarding hydropower, thermal power generation and renewable energy.

"Now as well as at that time, we are in a situation where we can't build a nuclear power plant in the North without consent from the United States," the source told Yonhap News Agency.

"The area in which we can cooperate immediately on the premise of improving inter-Korean relations is, after all, hydropower, thermal power and renewable energy, and a nuclear power plant is out of tune in this context," the source added.

Discussions on the possible energy cooperation between the two Koreas dated back to the former Park Geun-hye government, the ruling party said in a statement, slamming the PPP for engaging in an outdated ideological war.

Rep. Yoon Young-chan of the party, who served as Moon's senior press secretary, asked, "Do you think it is even possible to give North Korea 5 trillion won (US$4.4 billion) without consent from the opposition party?" referring to the approximate cost of building a nuclear power plant.

On Saturday, Rep. Yoon Joon-byeong of the ruling party claimed that the nuclear plant document came from the former Park Geun-hye administration. But on Sunday, he said his argument was just a "conjecture," after the energy ministry rejected the claim. 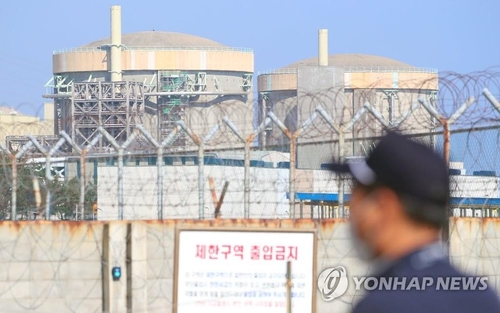