SEOUL, Feb. 1 (Yonhap) -- SK hynix Inc., South Korea's No. 2 chipmaker, said Monday it has completed the construction of a new chip production line in the country as the company tries to expand its presence in the memory sector.

The world's second-largest DRAM maker held the completion ceremony of the M16 chip fabrication plant, located at its main production base in Icheon, south of Seoul, after over two years of construction.

Since November 2018, SK hyinx has invested 3.5 trillion won (US$3.1 billion) for the construction project. When chip manufacturing equipment inside the plant is counted, its total investment reaches about 20 trillion won.

The new factory is its largest chip factory at 336 meters long, 163 meters wide and 105 meter high, which is equivalent to the height of a 37-story apartment building. 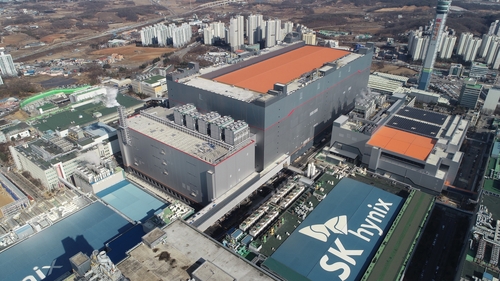 "It was worrisome when we decided to build the M16 two years ago, as the overall semiconductor memory was amid a downturn back then," SK Group Chairman Chey Tae-won said at the ceremony. "However, as the industry anticipates upcoming positive market conditions, it seems that our bold decision of the past will lead us to a better future."

Chey added that M16 also signals the "beginning point" of Yongin Semiconductor Cluster, in which SK hynix plans to invest a total of 122 trillion won for a chip manufacturing industrial complex in Yongin, south of Seoul.

SK hynix said it has brought in extreme ultraviolet (EUV) lithography equipment for the first time at M16, allowing the company to produce chips with finer circuit patterns.

The company plans to produce the fourth-generation 10-nanometer (1anm) DRAM products from the second half of this year using the equipment. The M16 is expected to begin its mass-production starting in June. 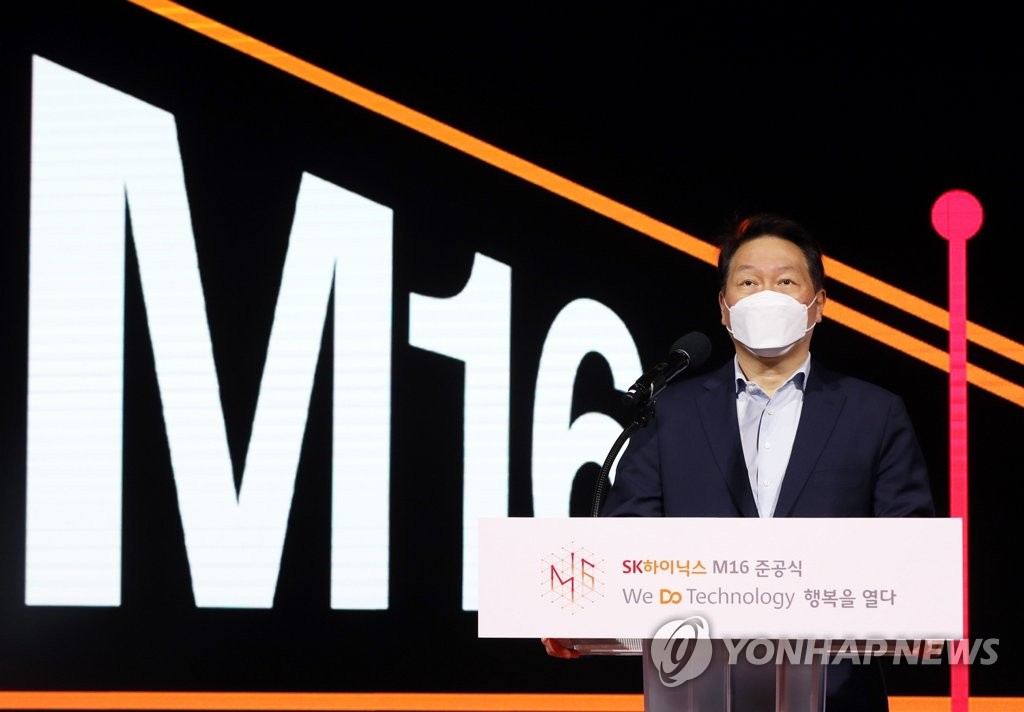 "M16 is a complex manufacturing plant where cutting-edge infrastructure, such as dedicated space for EUV equipment and advanced pollution reduction facilities, are concentrated," SK hynix CEO Lee Seok-hee said. "It will become a production plant of a higher level that contributes to the ESG management as well as creating economic value."

During the completion ceremony, Chey said he will return his entire 2020 salary following reports that workers from the chipmaker were irked by the company's bonus payments.

SK hynix last month announced that its employees will get a bonus equivalent to 20 percent of their annual wages based on last year's performance, but some of them reportedly were dissatisfied with the incentive payment, saying that it is too small compared to other firms.

Chey received 1.75 billion won in salary in the first half of 2020 from SK hynix, meaning he is likely to return more than 3 billion won to the company.

SK hynix, which employs some 28,000 workers, said it will review plans of where and how to use Chey's returned salary.