Esquire announced Friday (U.S. time) that it included the South Korean septet in the publication's retrospective feature article highlighting the "10 Best Pop Bands of All Time," crediting BTS for proving the "universal power of music."

Also included in the list were legendary British bands The Beatles and Queen, the Swedish disco-pop band ABBA and the psychedelic trailblazing act Sly and the Family Stone.

"BTS is arguably one of the vanguard acts to pioneer K-pop's immeasurable worldwide success," the magazine said. "The septet has rapidly redefined boy bands, fandoms and pop music itself." 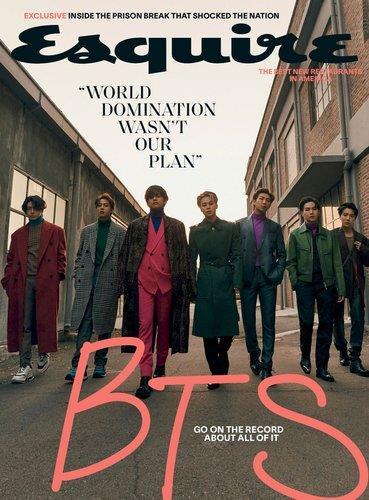 Last year marked one of the most prolific and monumental periods in the career of the K-pop act despite unforeseen setbacks from the new coronavirus pandemic.

In August, the group's cheerful pop-disco track "Dynamite" became the first song by an all-Korean act to top Billboard's main singles Hot 100 chart. As of Monday, the song has spent 22 weeks on the Hot 100.

In December, BTS achieved another milestone with "Life Goes On," the main track of its latest album, which also made history as the first Korean-language song to land at No. 1 on the Hot 100.

The group even earned a historic nomination for the upcoming Grammy Awards, slated for March 14. No South Korean pop artist had ever been nominated for the U.S. music awards before BTS.