SEOUL, Feb. 1 (Yonhap) -- The South Korean musical scene is rolling up its sleeves to resume onstage shows that have been suspended for nearly two months, as the health authorities eased the two-seat-apart rule starting Monday.

Earlier this week, the authorities decided to extend the second-highest social distancing measures in the country's five-tier scheme for another two weeks due to cluster infections ahead of the Lunar New Year holiday.

They, however, relaxed preventive guidelines at concert halls and theaters, as nearly no COVID-19 transmission cases have been reported there. Under the new rules, visitors are allowed to sit together with their accompanying friend or family member, with two empty seats on each side, under the current Level 2.5 distancing. If the social distancing level goes down to 2, operators can set one in-between empty seat.

Previously, concert halls and performing arts theaters had to put two empty seats between every audience member in a uniform manner.

The relaxation followed mounting calls from the musical industry to ease the rule that made it almost impossible for companies to make profits and led them to halt operations for months.

Musical performance companies have argued they could meet their break-even point if they sell 70 percent of the seats at theaters.

The new seating guidelines encouraged some musical operators that have put their projects on hold for nearly two months, citing financial difficulties, to stage their shows again later this month. 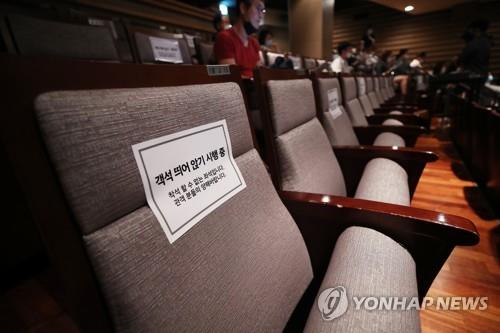 "Ghost: The Musical," a Korean edition of the Broadway musical, will restart its Seoul run Tuesday at D-cube Arts Center in western Seoul. The show was suspended on Dec. 5 last year.

Operators of musicals like "The Count of Monte Cristo," "Hope" and "A Gentleman's Guide to Love and Murder" are considering resuming onstage performances in the near future.

The eased seat rule is also applied to cinemas, where moviegoers are allowed to sit together with their friend or family member with two empty seats on each side. Until last week, one seat had to be left empty for every occupied seat in movie theaters.

But those facilities still have to comply with the 9 p.m. curfew.