Public institutions in Asia's fourth-largest economy hired 27,490 new employees last year, down 17.8 percent from a year earlier, according to the state portal All Public Information in One (ALIO).

State-run companies cut their employment by about 32 percent, and hiring by quasi-governmental institutions sank about 20 percent.

Yet last year's tally was higher than the government's original target of adding 25,700 new jobs to the country's public sector. 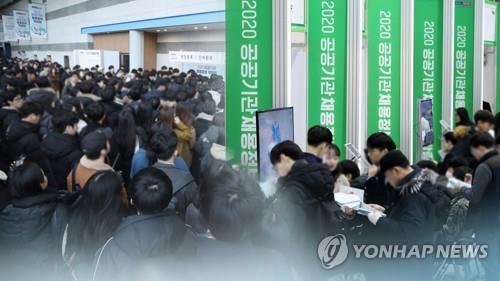 The 2020 figure was also 31.5 percent higher than the level in 2016, one year before the start of the Moon Jae-in administration.

This year, the government is seeking to jack up public-sector employment as part of efforts to cope with the coronavirus-induced economic crisis.

Local public institutions plan to employ 26,000 new workers in 2021, 1,000 more than last year's goal, with over 45 percent of them likely to be hired within the first half of the year.

Meanwhile, South Korea's public sector had a combined workforce of 422,455 as of the end of last year, up nearly 12,000 from the previous year.
(END)