SEOGWIPO, South Korea, Feb. 2 (Yonhap) -- Much like his teammates, the SK Wyverns' veteran third baseman Choi Jeong was shocked to hear last week that his ballclub was being sold.

Once he realized Shinsegae Group, the new owner taking over from SK Telecom, had some grand plans for the Korea Baseball Organization (KBO) club, Choi grew more hopeful of a better future.

Of several ideas and proposals put forth by Shinsegae, its plan to construct a new domed stadium caught Choi's eyes. 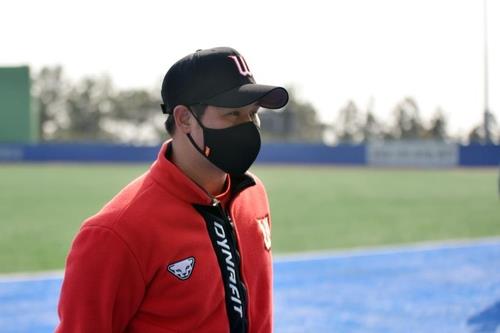 "I remember going to Tokyo Dome for the first time and I was just stunned to see how great it was," Choi told reporters during his club's spring training here on Jeju Island. "I hope Shinsegae Group will step up and build a place that can match Tokyo Dome."

Choi, who turns 34 later this month, said he likely won't be around long enough to play in the new stadium, if it is constructed. But he said he still wanted younger players to have a chance to play at a new dome.

Choi is a Wyverns franchise icon who debuted with the Incheon-based club in 2005 as an 18-year-old. He has since evolved into one of the KBO's premier sluggers, and he is atop the club's all-time list with 368 home runs. He's the league's active leader in that category, too. As team captain last year, Choi led the Wyverns with 33 home runs and 96 RBIs.

And for the first time, the face of the Wyverns will be donning a uniform bearing a different name.

"When I first heard that we were put up for sale, I didn't believe it at first," Choi said. "And then the official announcement came, and I was in a bad place for a bit. Later, I thought about good things that could come out of this, and I began to feel better.

"I won't be around with the new team for that long, but I'll try to help the club get off to a great start," Choi continued. "I hope some of the young guys will get to enjoy benefits from the sale."