GWANGJU, Feb. 2 (Yonhap) -- While he was pitching for the Oakland Athletics for the past five years, right-hander Daniel Mengden became a fan favorite for his handlebar mustache, the type that reminded old-school A's fans of the mustachioed former Oakland pitcher and Hall of Famer Rollie Fingers.

After signing with the Kia Tigers of the Korea Baseball Organization (KBO) in December, Mengden brought his facial hair with him, though, as of Tuesday, he didn't quite have his signature handlebar. Nonetheless, he's looking forward to making new fans with it in the new league. 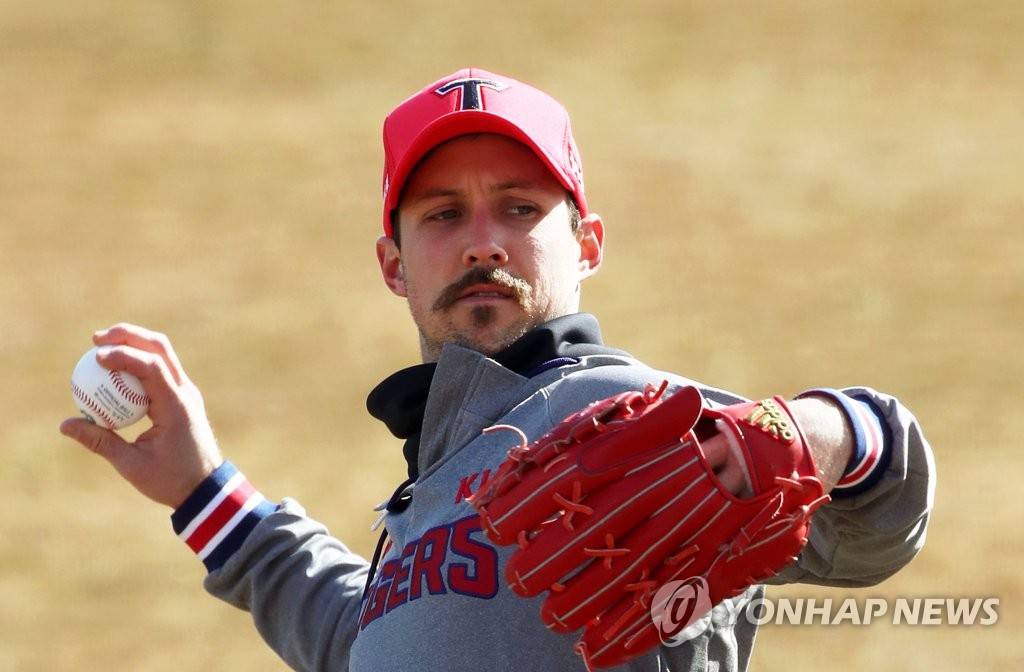 "I've always had it since college (at Texas A&M University) and I ended up bringing it to the majors," Mengden told reporters Tuesday, after his first day of practice with the Tigers at Gwangju-Kia Champions Field in Gwangju, 330 kilometers south of Seoul. The club's spring training began Monday, but Mengden had to complete his 14-day quarantine first.

"I've always kept it. It's kind of been my staple," he added. "I am really glad I am able to connect with some fans. It's just a mustache to me but everyone else always gets a kick out of it."

Mengden even said he'd like to see more of his Kia teammates grow a mustache so they could have a competition, before adding, "I'd probably win, though."

Of course, the Tigers didn't sign Mengden just for his mustache. They acquired him to win a bunch of games, too, as a replacement for right-hander Drew Gagnon, who wasn't brought back after going 11-8 with a 4.34 ERA in his lone KBO season in 2020. 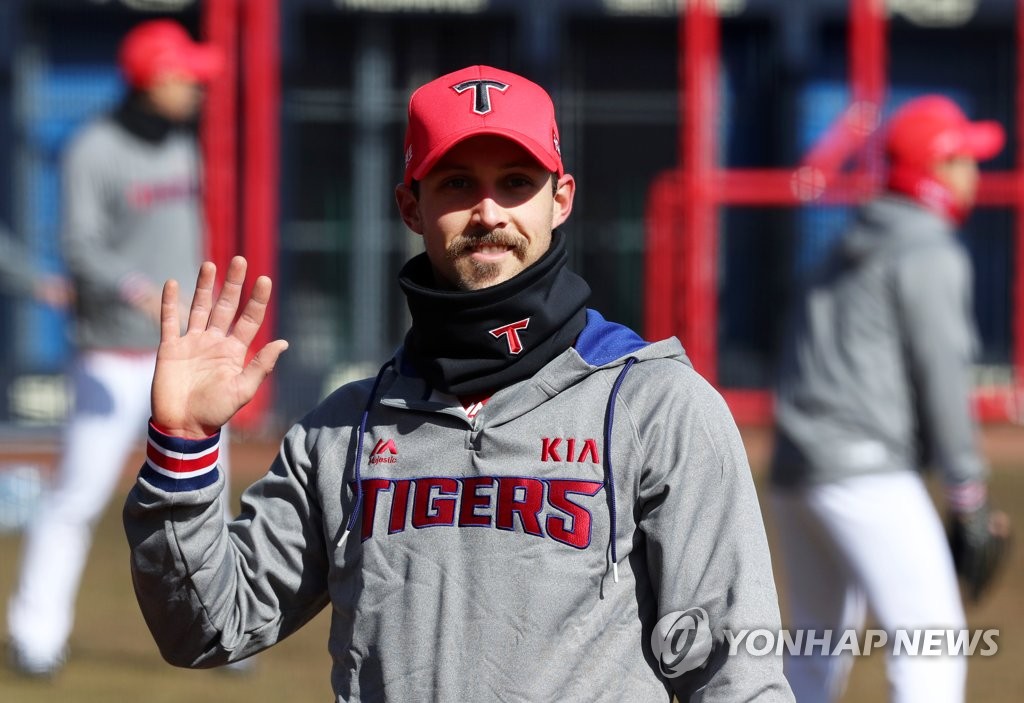 Of those 60 games, 48 were starts. Mengden said, despite bouncing around a bit between the rotation and the bullpen, he has "always wanted to be a starter."

"I am really excited to get the opportunity to start (in the KBO)," Mengden said. "I want to win a lot of games for the team and put us in the position to win as many games as possible."

The early transition to the new surroundings shouldn't be too difficult for Mengden, because he already has a few familiar faces on the Tigers. His manager, Matt Williams, was the A's third base coach in 2018 and 2019 while Mengden was there. The right-hander was also teammates with the current Tigers pitcher Aaron Brooks in Oakland for two years. The team's first baseman, Preston Tucker, and Mengden were in the same spring training for the Houston Astros before Mengden was dealt to Oakland.

"It's really nice to know some players. It helps make it easier getting used to everything," Mengden said. "I've been talking to (Brooks) a little bit about pitching in general and understanding the game when it comes to umpires, respect of the game, just a bit here and there. It's definitely going to be an advantage having Brooks here to help guide me through the process." 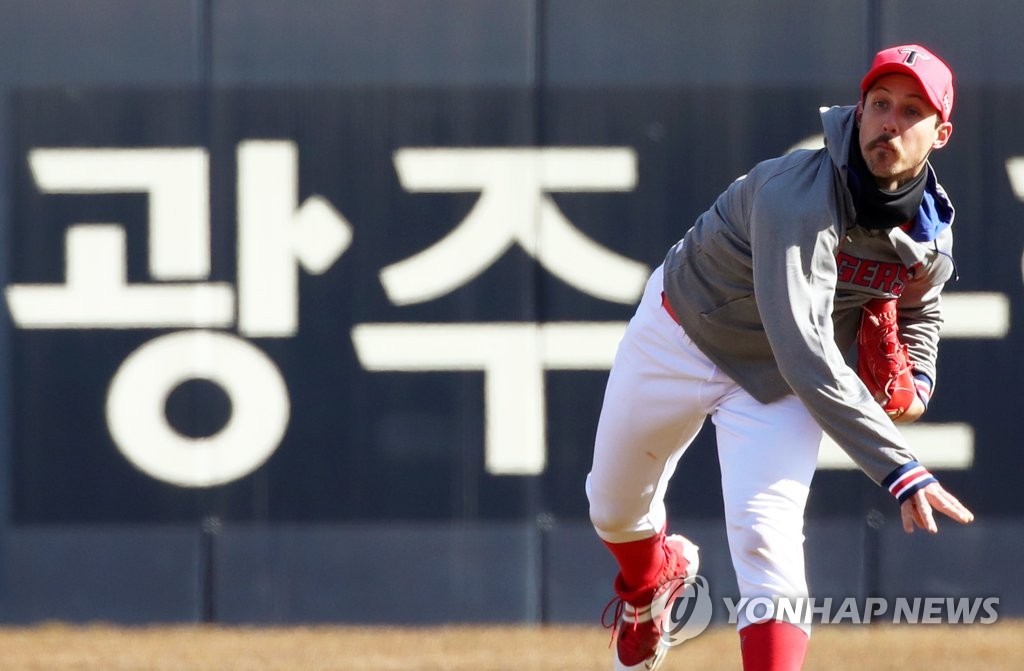 There is yet another Oakland A's alum in the KBO: Hanwha Eagles' infielder Ryon Healy, who also happens to be a former roommate of Mengden's.

"We were friends and roommates with the A's for a while. I am looking forward to facing him," Mengden said.

Mengden was limited to four appearances last year, following an elbow surgery in February. He said the procedure to remove a bone spur was a minor one and his arm "feels really good" heading into this season.

At 27, Mengden is still in his prime years, not so old that a second tour of duty in the majors would be out of the question. In recent years, some former major league pitchers came over to the KBO to reinvent themselves and parlayed that success into new big league deals. During this offseason, Chris Flexen, 26, returned to the bigs after one successful KBO season with the Doosan Bears. 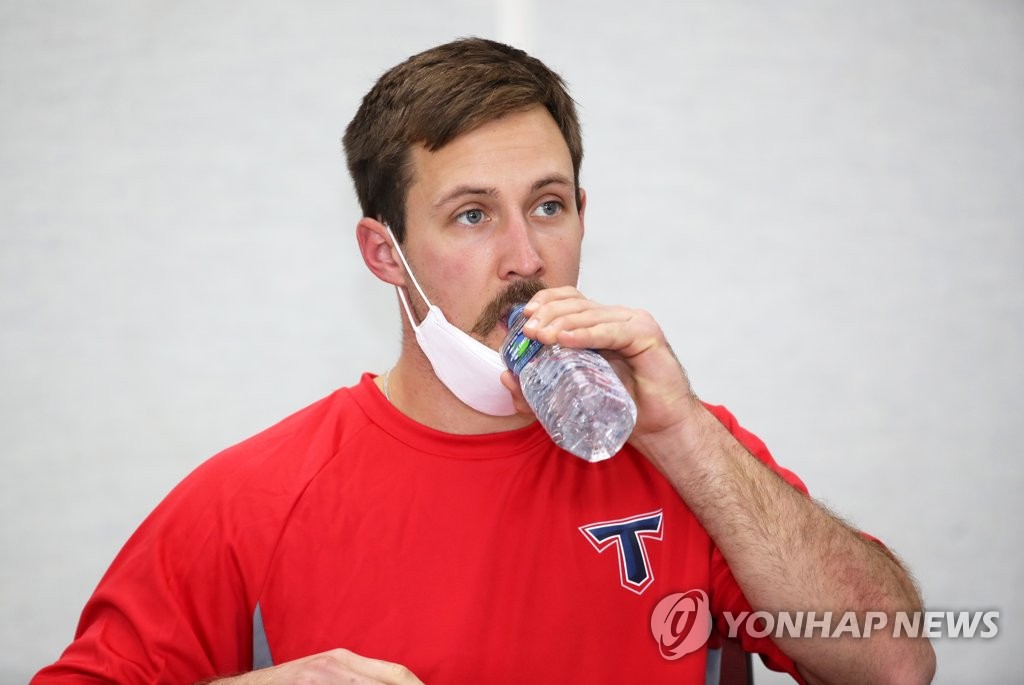 Mustachioed pitcher looking to win competition, on and off the mound

Mustachioed pitcher looking to win competition, on and off the mound