According to the full list of nominees for the 2021 Golden Globe Awards slated for Feb. 28 by the Hollywood Foreign Press Association (HFPA), Korean American director Lee Isaac Chung's semi-autobiographical film will compete for best motion picture in foreign language with "Another Round" from Denmark, "La Llorona" from Guatemala, "The Life Ahead" from Italy and "Two of Us" from the United States.

"Minari" depicts first-generation immigrants from Korea in pursuit of their own American dream from the point of view of a 7-year-old boy named David (Alan Kim) and his parents, Jacob (Steven Yeun) and Monica (Han Yeri). The family's life faces some changes after the children's grandmother (Youn Yuh-jung) arrives in the U.S. from Korea.

The film has been a hit in the ongoing U.S. award circuit, bagging a number of trophies from film festivals and critics associations, including the best jury and audience awards at last year's Sundance Film Festival.

Over the past few months, "Minari" has been at the center of controversy in the U.S., as HFPA categorized it as a foreign-language film, saying that it was not eligible for best picture as its dialogue is mostly in Korean.

Many Korean Americans and others of Asian origin in the U.S. entertainment circle have complained about the decision, saying that "Minari" is about an American family and made by a U.S. director and production company. 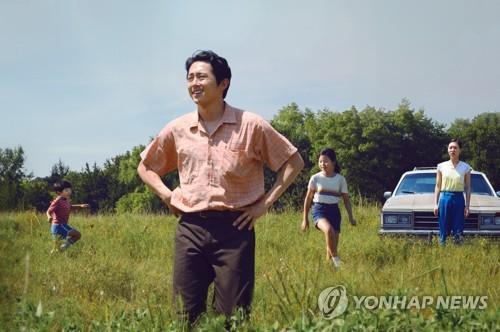