SEOUL, Feb. 4 (Yonhap) -- South Korean search giant Naver Corp. said Thursday it will shut down its online portal's real-time search chart service this month amid a yearslong controversy over whether it could be prone to advertising or be used to rig public opinion.

The portal giant, which draws 30 million users everyday, said in a blog post that it will shut down the service on Feb. 25 as user searches have become more diversified and specific. 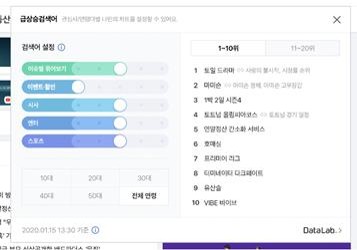 The search chart first appeared in 2005 and has served as a major part of Naver's online portal, showing the most popular trending searches by rank.

The service, however, came under fire in recent years amid allegations that it could feature advertisements or political messages.

While Naver has tried to address such concerns by expanding the search rank list from 10 to 20 and using artificial intelligence technology to personalize searches catered to user interests, it said it would discontinue the service.

Naver has also faced accusations that it abuses its search algorithms, with the country's antitrust regulator fining the company 26.7 billion won (US$23.8 million) last October for manipulating search algorithms in favor of the company's online shopping site.

Naver to shut down portal's trending search chart this month

Naver to shut down portal's trending search chart this month