WASHINGTON, Feb. 4 (Yonhap) -- U.S. President Joe Biden said Thursday that the United States will review its global defense posture, a move that could affect the number of U.S. troops stationed overseas, including those in South Korea.

"Today, I'm announcing additional steps to course correct our foreign policy and better unite our democratic values with our diplomatic leadership," Biden said in his first speech on national security and foreign policy delivered from the Department of State.

"To begin, Defense Secretary Austin will be leading a global posture review of our forces, so that our military footprint is appropriately aligned with our foreign policy and national security priorities," the president said, adding the planned redeployment of U.S. troops in Germany will be suspended during the period of the review.

This appears to signify a departure from the previous Donald Trump administration that frequently used troop redeployment or drawdowns as a bargaining chip in pressuring U.S. allies to pay more for their joint defense.

Trump had also hinted at drawing down U.S. troops from South Korea amid stalled burden-sharing negotiations for the stationing of some 28,500 troops on the Korean Peninsula.

Biden reiterated the importance of the alliance.

"Investing in our diplomacy isn't something we do just because it's the right thing to do for the world. We do it in order to live in peace, security and prosperity. We do it because it's in our own naked self-interest," he said.

"(When) we strengthen our alliances, we amplify our power, as well as our ability to disrupt threats before they can reach our shores," the U.S. president added. 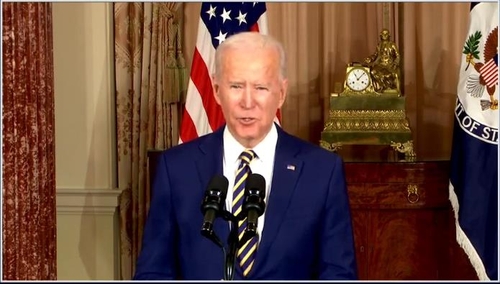 His remarks came shortly after he said diplomacy was "at the heart of all that I tend to do."

"You are the heart of it," he said while speaking to U.S. diplomats during his first trip to the State Department since taking office on Jan. 20.

Biden said leading with diplomacy meant working with both friends and foes.

"We will compete from a position of strength, by building back better at home, working with our allies and partners, renewing our role in international institutions and reclaiming our credibility and moral authority, much of which has been lost," added the president.