SAG on Friday (Korean time) unveiled its final list of nominations for its 27th edition of the award ceremony slated for April 4.

Directed and written by Korean American Lee Isaac Chung, "Minari" is up for outstanding performances by a cast in a motion picture, by a male actor in a leading role and by a female actor in a supporting role. 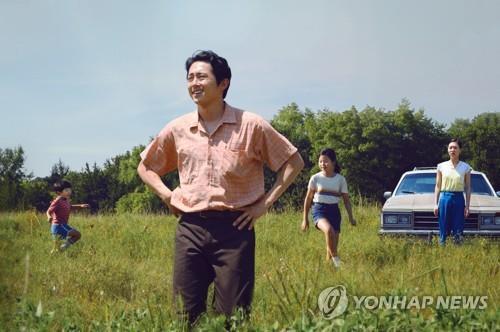 The seven-member cast of "Minari," including Steven Yeun, Han Yeri, Youn Yuh-jung and Alan Kim, will compete for SAG Awards' top prize with actors of "Da 5 Bloods," "Ma Rainey's Black Bottom," "One Night in Miami" and "The Trial of the Chicago 7."

Bong Joon-ho's Oscar-winning sensation "Parasite" was awarded the trophy last year, given to the entire cast with the finest acting achievements in film.

In the best supporting actress category, South Korean actress Youn Yuh-jung will contend with Maria Bakalova of "Borat Subsequent Moviefilm," Glenn Close of "Hillbilly Elegy," Olivia Colman of "The Father" and Helena Zengel of "News of the World."

Steven Yeun is among five candidates for best actor -- Riz Ahmend of "Sound of Metal," Chadwick Boseman of "Ma Rainey's Black Bottom," Anthony Hopkins of "The Father" and Gary Oldman of "Mank."

Launched in 1995, the SAG Awards, a major Hollywood awards event, are considered a key indicator for the Oscars.

"Minari," based on director Chung's childhood memories of his parents settling in Arkansas, has been a hit in the ongoing award season in the run-up to the Oscars on April 25. It has collected nearly 50 accolades from film critics associations and festivals, including the audience and jury awards at last year's Sundance Film Festival.

In particular, Youn has bagged 20 best supporting actress titles so far, becoming a leading contender for the Oscar statuette.

"Minari" depicts first-generation immigrants from Korea in pursuit of their own American dream from the point of view of a 7-year-old boy named David (Alan Kim) and his parents, Jacob (Steven Yeun) and Monica (Han Yeri). The family's life faces some changes after the boy's grandmother, Soon-ja (Youn), arrives in the United States from Korea.