During a parliamentary confirmation hearing, Chung stressed "various implications" of large exercises between the allies, amid concern that such military maneuvers could provoke North Korea and derail efforts to resume stalled dialogue with it.

Seoul and Washington are currently discussing how to hold a combined command post exercise this spring, the defense ministry has said. Pyongyang has routinely slammed allied drills as a rehearsal for war against it.

"But as large-scale combined exercises have various implications for the Korean Peninsula situation, (South Korea) is very closely communicating with the U.S. side," he said. 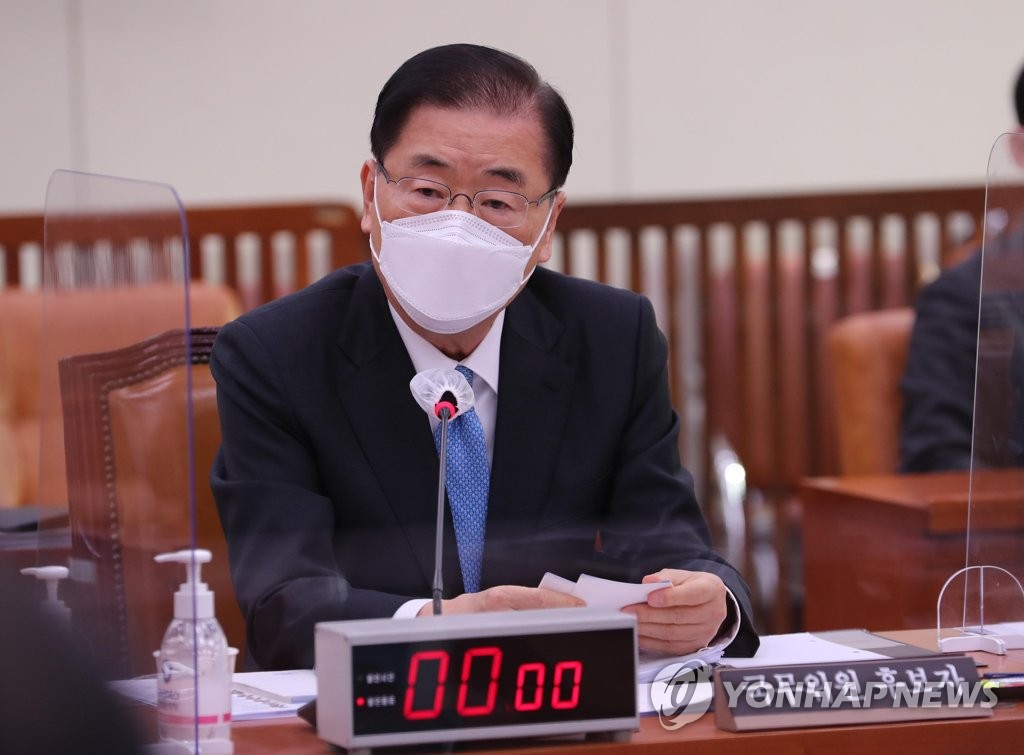 In response to a question about whether it is inevitable to scale down the springtime combined exercise due to the pandemic, Chung said, "Yes."

"Taking that (pandemic) situation into account as well, the military authorities of South Korea and the U.S. are closely consulting over how to stage the exercise," he said.

The issue of combined military exercises highlighted a policy dilemma for Seoul, which has sought to use the drills to expedite the process to retake wartime operational control from Washington while avoiding inflaming cross-border tension.

Touching on an ongoing North Korea policy review by the administration of U.S. President Joe Biden, Chung expected that it might not take much time.

"The U.S. has said that during the review process, it would first look into the South Korean government's views and consult (with Seoul), and I regard this as a positive signal," he said.

Chung went on to say that using its communication channels, the South has been continuing to urge the North to return to dialogue at an early date.

Regarding a denuclearization approach to be employed when talks between Washington and Pyongyang resume, the nominee, credited with guiding Moon's engagement policy toward the North, expressed his support for a phased formula.

"What is the most realistic approach is a step-by-step one entailing one or two interim stages on the path toward the end goal, after agreeing on the final stage or final picture of denuclearization," Chung said.

"I will consult over that with the U.S.," he added.

Touching on the role for the South to play when the North returns to dialogue with the U.S., Chung pointed out the need for the two negotiating partners to build a "new relationship of trust."

In his opening remarks, Chung pledged to seek substantive progress in stalled denuclearization efforts through an early resumption of dialogue with the North under a "coordinated" strategy with the U.S.

The nominee also said he would push for Pyongyang's participation in a Seoul-led initiative for regional cooperation in battling pandemics and other public health crises.