DAEJEON, Feb. 9 (Yonhap) -- A court rejected the issuance of an arrest warrant Tuesday for a former industry and energy minister in connection with the controversial closure of an aging nuclear reactor.

The Daejeon District Court denied the warrant sought by prosecutors against Paik Un-gyu on charges of abuse of power and obstruction of business.

Paik has been under probe over allegations that he abused his power in the viability assessment of Wolsong-1, the nation's second-oldest nuclear reactor, before its operator, the state-run Korea Hydro & Nuclear Power Co. (KHNP), decided to close it in December 2019 based on the assessment.

In October 2020, a state audit found the nuclear reactor's economic viability was unreasonably undervalued in favor of an early closure.

The Board of Audit and Inspection (BAI) questioned the general credibility of the process in calculating economic numbers of the reactor, saying that Paik was one of the leading figures in the mishandling of the assessment.

On his way to attend the warrant hearing earlier in the day, he said the decision to close it was "in line with the government's policy that put its priority on public safety."

He is said to have denied the allegations against him.

The former minister is also suspected of being involved in the deletion of documents related to the reactor closure by three ministry officials.

They were indicted over allegations that they destroyed 530 materials and files about the government's decision to terminate the operation of Wolsong-1, right before the BAI ordered the submission of the documents late last year.

The closure of Wolsong-1 has remained a hot-button issue in domestic politics since President Moon Jae-in decided in 2017 to decommission the reactor earlier than scheduled in line with his energy policy.

A TV station earlier reported that documents on a nuclear power project in North Korea were included among hundreds of the deleted files.

The report spawned speculation the Moon administration may have pushed for a secret plan to build an atomic power plant in the North and that Moon may have delivered the proposal to North Korean leader Kim Jong-un during their summit in April 2018. 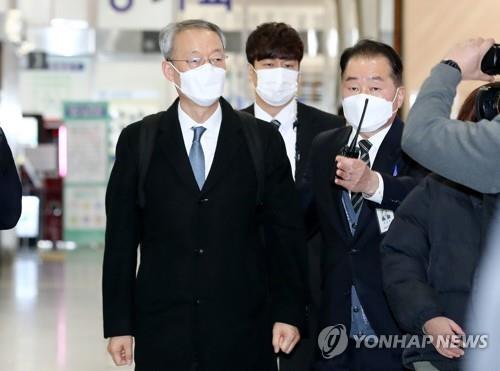