SEOUL, Feb. 12 (Yonhap) -- A Seoul-based nongovernmental organization has called for the withdrawal of a paper written by a Harvard University professor claiming that Japan's wartime sexual slavery was voluntary prostitution.

The Voluntary Agency Network of Korea (VANK), a group known for international online campaigns to promote the awareness of South Korea's history, made the call in an internet petition early this week against J. Mark Ramseyer, Mitsubishi professor of Japanese Legal Studies at Harvard, according to its website.

The petition had drawn over 5,200 signatures as of early Tuesday.

The move came after a group of Korean students at Harvard Law School issued a statement criticizing Ramseyer over his arguments in the paper, titled "Contracting for sex in the Pacific War," that the sex slaves were actually prostitutes who worked on a contract basis and earned a lot of money.

The students' association said his claims were factually inaccurate and misleading, and has demanded he apologize to victims.

VANK said it has sent emails to the professor and publishers of international academic journals calling for the withdrawal of the paper. It also sent a letter to the university calling for disciplinary action against the professor.

The issue of the sex slavery victims, euphemistically called comfort women, has long been a thorny issue between South Korea and Japan. Tensions have recently flared anew after a Seoul court ordered Japan last month to pay damages to a group of former sex slaves.

Tokyo insists the issue was permanently resolved through a bilateral agreement in 2015 with the South Korean government. But the victims have called the agreement inadequate, saying it lacks a sincere apology from Tokyo and left out their voices in the negotiation process. 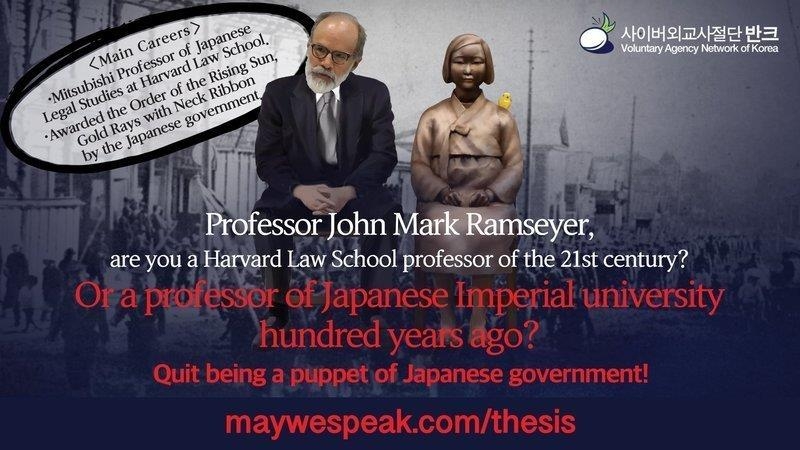