The country collected 285.5 trillion won in taxes last year, compared with 293.5 trillion won the previous year, according to the Ministry of Economy and Finance.

Last year, the collection of corporate taxes declined 16.7 trillion won on-year to a four-year low of 55.5 trillion won, as business activity remained sluggish amid the COVID-19 pandemic, the ministry said. 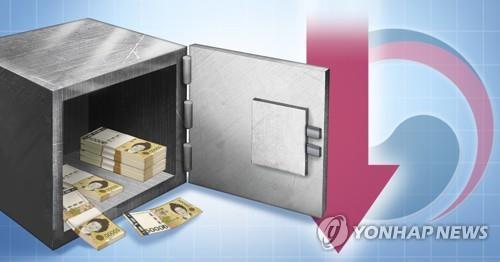 For fiscal 2020, the country's total income, including tax revenue, amounted to 465.5 trillion won, up 63.5 trillion won from a year earlier, according to separate data by the ministry.

With 2.3 trillion won worth of the balance carried forward to this year, the country posted a surplus of 9.4 trillion won last year.

It marked the sixth straight year for the country to log such a surplus.

The ministry did not provide details about fiscal soundness but added the country's 2020 fiscal deficit is estimated to have been smaller than its earlier estimate.

South Korea is widely expected to see a further fiscal shortfall and a rise in government debt, as it plans to maintain an expansionary fiscal policy this year to cope with the economic fallout of the pandemic.

The country's debt is expected to reach 956 trillion won in 2021, up 150.8 trillion won from a year earlier, the finance ministry said.

Its debt-to-gross domestic product (GDP) ratio, a gauge of a nation's financial health, is forecast to reach 47.3 percent this year, sharper than just below 40 percent before the outbreak of the new coronavirus.