SEOUL, Feb. 11 (Yonhap) -- POSCO plans to begin producing lithium in a salt lake in Argentina in 2023, a company official said Thursday, as the world's fifth-largest steelmaker has been aggressively moving to secure the key metal for electric vehicle (EV) batteries.

The steelmaker is set to build a plant this year that will have an annual production capacity of 68,000 tons of lithium. 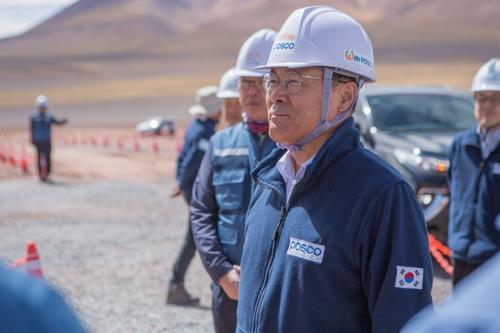 "We plan to begin producing lithium" in the salt lake in 2023, the company official said Wednesday. He asked not to be identified and did not give any further details.

The site is confirmed to contain 13.5 million tons of lithium reserves, which is enough to make batteries for about 370 million electric cars, according to POSCO.

Initially, POSCO estimated that the site has 2.2 million tons of lithium reserves.

A cathode is one source of lithium in a lithium-ion battery and is also a key component for EV batteries.

POSCO to begin producing lithium in Argentina in 2023

POSCO to begin producing lithium in Argentina in 2023