SEOUL, Feb. 10 (Yonhap) -- The density of ultrafine dust particles has markedly fallen in both South Korea and China last year due mainly to close bilateral cooperation, their governments said in a joint press release Wednesday.

According to the release by Seoul's Ministry of Environment and Beijing's Ministry of Ecology and Environment, concentrations of ultrafine dust particles declined about 27 percent in South Korea and slightly over 28 percent in China in 2020, compared with the 2015 levels.

In South Korea, last year's national average of ultrafine particles smaller than 2.5 micrometers in diameter, known as PM 2.5, was 19 micrograms per cubic meter, marking a fall of 26.9 percent from 26 micrograms recorded in 2015. 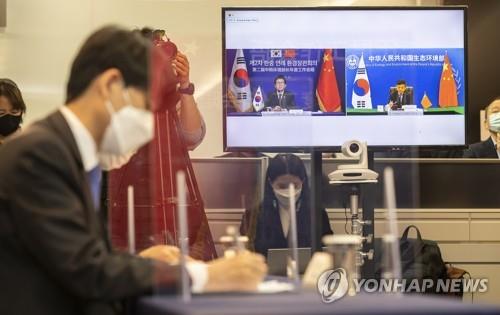 The Seoul government has restricted the operations of dilapidated diesel vehicles, coal plants, construction sites and other large emitters of ultrafine dust under its comprehensive dust management policy launched during the Moon Jae-in government. Under the policy, roadside cleaning has also been strengthened and parking fees were increased at public car parks during the winter months, for instance.

The aggregate amount of ultrafine dust-related air pollutants from 60 coal-fired power plants across the nation also fell from 8,781 tons in December 2018 to 3,527 tons last December.

The Chinese government has also reduced emissions from coal power plants, steelworks and vehicles under the so-called three-year action plan for winning the blue sky war.

On the government level, the two countries have held a total of 23 rounds of bilateral environment cooperation conferences since 1993 to discuss joint efforts to reduce ultrafine dust particles.