In response to an increasing number of accidents caused by pet canines, the Ministry of Agriculture, Food and Rural Affairs amended the Animal Protection Act last year, including the introduction of mandatory liability insurance for five breeds of canines that the government deems as being ferocious.

The new regulation, which goes into effect Friday, requires owners to insure against injuries and damage caused by such pet animals. Those who do not comply could be fined up to 3 million won ($2,709). 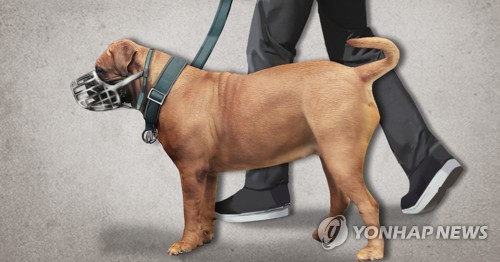 Hana Insurance Co. and some other companies have recently launched such policies with an annual fee of about 15,000 won per dog.

The revised law also toughens punishment for animal abuses. Those who cruelly kill animals could face imprisonment of up to three years or a fine of up to 30 million won, compared with the previous maximum punishment of two years in prison and 20 million won in fines.

Owners must use a leash no longer than 2 meters when taking their pets out of doors. All pets also need to wear name tags that include information of owners and contact numbers.
(END)

Insurance mandatory for owners of dangerous breeds of dogs

Insurance mandatory for owners of dangerous breeds of dogs