SEOUL, Feb. 10 (Yonhap) -- The U.S. Forces Korea (USFK) said Wednesday it will ease antivirus restrictions for most areas except for Seoul and some surrounding regions, starting Monday, allowing its members to dine at restaurants and conduct off-base activities.

The Health Protection Condition (HPCON) level will be adjusted by one notch to the second-lowest level of "Bravo" from "Charlie" for USFK areas I and III and the Seongnam district, effective Monday at 7 a.m., according to the U.S. military.

Those areas cover the northern part of Gyeonggi Province, the northeastern province of Gangwon, Chungcheong Province in central South Korea, as well as the cities of Seongnam and Osan, south of Seoul. 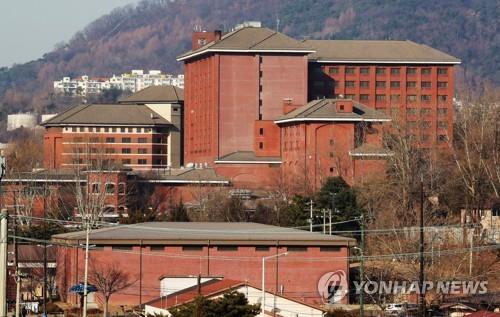 Under the eased status, service members are allowed to dine at restaurants of less than four people, shop offline and conduct outdoor activities as long as they adhere to basic antivirus guidelines.

Domestic trips with overnight stays at hotels, including on the southern resort island of Jeju, are allowed, and travel among areas currently under level B is also possible, it added.

From Monday, USFK lowered the alert level from C to B for Area IV that includes the southeastern and southwestern provinces of Gyeongsang and Jeolla, respectively.

The adjustment is "based on USFK's assessment of the current COVID-19 situation in South Korea," USFK said.

But Seoul and the surrounding metropolitan area will remain in HPCON C until further notice.

Travel to the greater Seoul area is limited except for official duties and other necessary travel for life, health and safety, though leisure travel to the Yongsan Garrison in central Seoul is allowed, according to USFK.

"All bars, clubs, karaoke rooms and establishments that restrict entrance to adults only remain off limits pen-wide until further notice," it added.

Meanwhile, USFK said in a separate statement that a service member was mistakenly diagnosed with the virus last week. Thus, the total number of COVID-19 infections among the USFK members stood at 720, most of whom tested positive upon their arrival here.

South Korea has been struggling to bring the virus under control in recent months as it has experienced another wave of the pandemic. The authorities remain on high alert ahead of the four-day Lunar New Year holiday period starting Thursday. 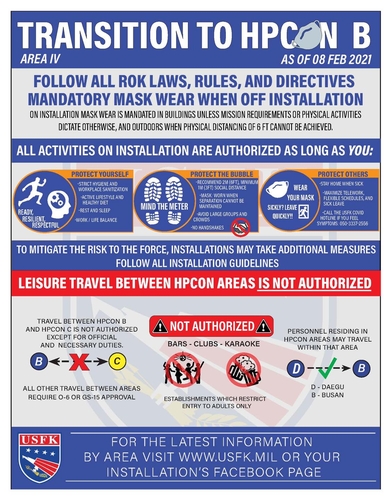