WASHINGTON, Feb. 10 (Yonhap) -- The United States will not hesitate to use force if necessary to protect its people and allies, President Joe Biden said Wednesday.

"As your commander in chief, I will never hesitate to use force to defend the vital interests of American people, and our allies around the world when necessary," Biden said during his visit to the Pentagon.

"The central indispensable mission of the Department of Defense is to deter aggression from our enemies, and, if required, to fight and win wars to keep America safe," he added.

Still, Biden said the use of force must always be the last resort.

"I believe force should be a tool of last resort, not first," he said in his address to U.S. service members and defense officials.

Biden's visit to the Pentagon marked his first since he took office on Jan. 20. It also marked his second trip to a Cabinet department following his trip to the Department of State last week. 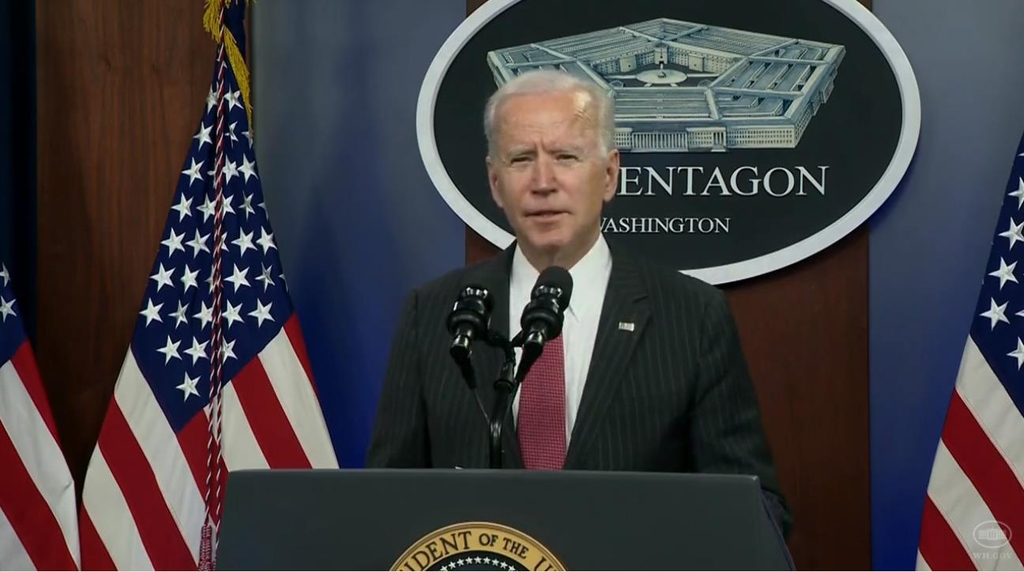 During his visit to the State Department, the new U.S. president had emphasized the importance of finding common ground, saying diplomacy be at the heart of everything the U.S. does.

He highlighted the work of defense officials to help ensure the success of diplomacy.

"I also know that you are central to the work of our diplomacy, not only as the ultimate guarantor of our security, but as diplomats yourself," said Biden.

His trip to the Pentagon also came as the U.S. is undertaking a defense posture review that may lead to shifts in the number of U.S. troops overseas.

Biden said, in addition to the ongoing global posture review, the Department of Defense has launched a task force to identify measures needed to face challenges posed by China, which may include an increase in U.S. military presence in Northeast Asia.

The task force will "work quickly... to provide within the next few months recommendations to Secretary (Lloyd) Austin on key priorities and decision points, so that we can chart a strong path forward on China-related matters," said the president.

The U.S. currently has some 28,500 troops stationed in South Korea.

(LEAD) U.S. will not hesitate to use force when necessary to protect allies: Biden

(LEAD) U.S. will not hesitate to use force when necessary to protect allies: Biden