SEOUL, Feb. 11 (Yonhap) -- Major highways across South Korea were clogged with heavy traffic on Thursday as many people headed to hometowns despite the COVID-19 pandemic to celebrate Lunar New Year's Day.

Many southbound sections of the Gyeongbu Expressway connecting Seoul to the southeastern port city of Busan, including those near Osan and Cheonan, both south of Seoul, were congested due to heavy traffic on the first day of the holiday, according to Korea Expressway Corp (KEC).

Traffic congestion peaked at around 1 p.m. and began to ease up at around 7 p.m. 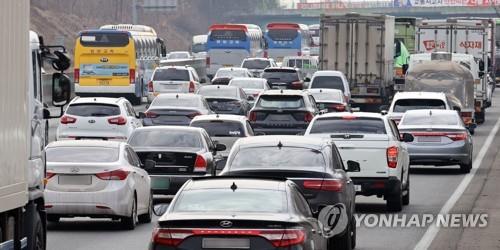 The Lunar New Year holiday began on Thursday and will last through Sunday.

To fend off a potential upsurge in COVID-19 infections during the traditional holiday when travel and family gatherings increase, the government has kept in place a nationwide ban on private gatherings of five or more people.

To discourage the Lunar New Year migration, the government is permitting sales of only window seats on trains and withholding its annual exemption of toll fees on highways during the holiday.

KEC estimated some 4.29 million vehicles will hit roads across the country on Friday, higher than 3.78 million Thursday.

Inbound traffic to Seoul is expected to peak at around noon on Friday before starting to wane around 10 to 11 p.m., according to KEC.