SEOUL, Feb. 11 (Yonhap) -- One of the 20 crew members who were aboard a South Korean oil tanker seized by Iran last month has been released and returned home, the foreign ministry said Thursday.

The Korean sailor, one of those detained along with the MT Hankuk Chemi by Teheran, entered his home country Wednesday afternoon for health reasons, the Ministry of Foreign Affairs said.

He is the first among the detained sailors to be repatriated after the chemical carrier was seized by Iran's Islamic Revolutionary Guards Corps (IRGC) on Jan. 4.

Earlier this month, Teheran said it will free the crew members detained aboard the MT Hankuk Chemi, except for the captain.

Iran's decision to release the sailors appears to have been made after Seoul made progress in talks with the United States about using some of the Iranian funds frozen in South Korean banks due to U.S. sanctions to pay off Iran's U.N. dues in arrears.

The foreign ministry said it is currently talking with other sailors remaining on the ship in efforts to find a replacement workforce that could take over the maintenance of the ship and the safekeeping of the freight.

Once the replacement workforce becomes available, the ministry plans to repatriate the sailors in stages, according to diplomatic sources.

"As soon as the plan for the sailors' disembarkment is fixed, the ministry plans to provide consular assistance to move sailors wishing to return home to Tehran and help them take polymerase chain reaction tests (for COVID-19) and head back home," a ministry official said. 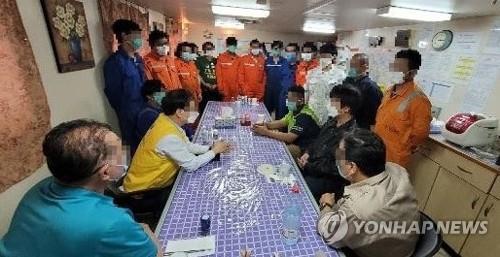 One of sailors aboard S. Korean oil tanker seized in Iran returns home

One of sailors aboard S. Korean oil tanker seized in Iran returns home