The case of the highly pathogenic H5N8 strain of avian influenza was confirmed at an egg farm in Pyeongtaek, some 70 kilometers south of Seoul. The farm was home to some 240,000 hens, according to the government's AI response headquarters.

Quarantine authorities imposed a travel ban on movement into and out of the poultry farms in the affected area, having culled chickens at nearby farms as part of precautionary measures.

South Korea has destroyed 26 million poultry around infected farms so far to prevent the spread of the disease in the ongoing wave of AI. More than 80 cases involving poultry farms have so far been confirmed.

The move has led to a sharp increase in the consumer price of eggs, which shot up 43.8 percent on-year over the past week.

South Korea identified a whopping 340 cases of avian influenza traced to poultry farms during the previous wave, which ran from October 2016 to February 2017. 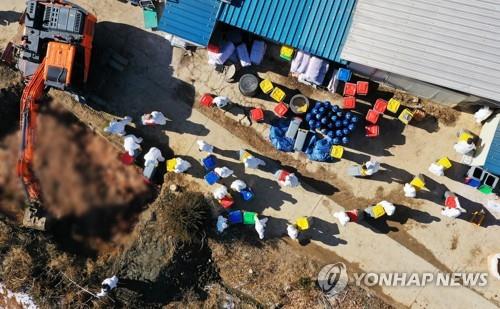