The South Korean tech giant shipped 29.7 million smartphones in India in 2020, down 4 percent from a year earlier, for a 20 percent market share, according to market researcher International Data Corp. (IDC).

"Samsung remained in its second spot in the 2020 ranking, with its online-heavy portfolio driven by the Galaxy M series and the newly launched F series," IDC said. "Online channel registered strong 65 percent year-on-year growth, while the offline channel shipments declined by 28 percent, thus leading to an overall drop of 4 percent in 2020."

Samsung was the only non-Chinese brand in the top five Indian smartphone market.

Xiaomi topped the market in 2020 with a 27 percent market share although its smartphone shipments declined 6 percent on-year to 41 million units.

"Xiaomi's performance in 2020 was led by its affordable Redmi 8 series, gradually replaced by the Redmi 9 series in the second half of 2020," IDC said. 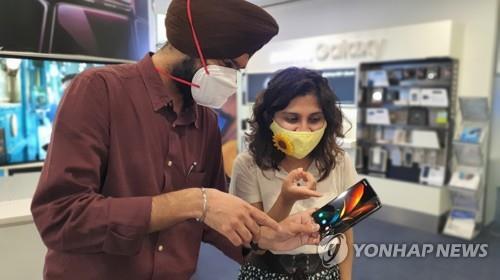 In 2020, the Indian smartphone market contracted 2 percent on-year to 149.7 million units due to the pandemic, according to IDC.

However, IDC predicted a "stronger market acceleration" in 2021 following a rebound in the second half of 2020. In the last three months of 2020, India saw record fourth-quarter smartphone shipments with 45 million units, up 21 percent from a year ago.

In particular, in the fourth quarter of 2020, Samsung's shipments soared 35 percent on-year to 7.7 million units.