SEOUL, Feb. 16 (Yonhap) -- The state intelligence agency is reviewing ways to conditionally give a closed-door briefing to the National Assembly on its alleged illegal surveillance of politicians and other social figures during the reign of the conservative Lee Myung-bak government, the NIS chief told lawmakers Tuesday.

"The National Intelligence Service (NIS) is considering plans to report to the parliamentary Intelligence Committee on the issue on condition of non-disclosure (to the public) if the committee approves (the request) with assent from at least two-thirds of its sitting members," Park Jie-won was quoted as saying during a closed-door committee session.

The spy agency is facing media-raised allegations that it conducted illegal surveillance of some 1,000 social figures, including all the then-incumbent lawmakers as well as journalists, civic activists, legal professionals and TV celebrities, as part of background checks in 2009.

When asked to release the information gathered through the alleged surveillance ahead of parliamentary approval, however, the NIS director rejected the request.

He said "disclosing the personal, secret records to the public could go against law," according to ruling Democratic Party Rep. Kim Byung-kee, an executive secretary of the Intelligence Committee.

The ruling Democratic Party has been zeroing in on the allegations, with party chief Rep. Lee Nak-yon on Monday denouncing them as "a serious crime."

The party also argued that Park Hyung-jun, who served as Lee's chief secretary for political affairs during 2009-2010, should be held accountable for the alleged surveillance. Park is currently leading the race for the Busan mayoral election, set for April 7, as a preliminary candidate for the main opposition People Power Party (PPP).

The PPP, however, framed the offensive by the DP as a politically driven maneuver to influence the forthcoming by-elections. 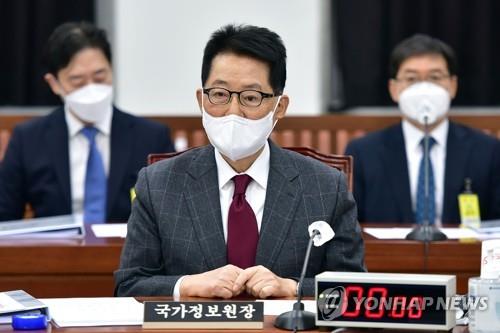