SEOUL, Feb. 17 (Yonhap) -- Samsung Electronics Co. was the second-largest vendor in Russia's online smartphone market in the fourth quarter of 2020, a report showed Wednesday, amid the pandemic-induced stay-at-home trend.

The South Korean tech giant accounted for 27 percent of online smartphone shipments in Russia in the last three months of 2020, up from 24.9 percent a year ago, according to market researcher Counterpoint Research.

Samsung was the top brand in the overall Russian smartphone market in the October-December period, but its online channel sales were beaten by China's Xiaomi Corp. which claimed the top position with a share of 31 percent, up from 19.2 percent a year earlier, Counterpoint Research data showed.

Apple Inc. entered the top three rankings for the first time with a share of 15.5 percent, thanks to robust online sales of the iPhone 12 series. 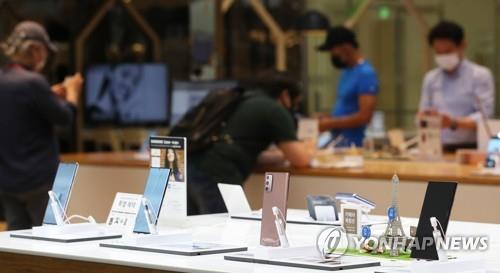 Huawei Technologies Co. dropped to the fourth spot from first place due to U.S. sanctions. Its share of the online smartphone market plunged to 14.8 percent from 31.2 percent a year ago.

Although Russia's total smartphone sales fell 11 percent year-on-year in the fourth quarter, online sales in the market continued to increase, accounting for 35 percent of the total, Counterpoint Research said.

The average selling price of smartphones in Russia increased 8 percent on-year to US$258 in the fourth quarter.

"Despite the economic downturn in Russia, people preferred to spend more on high-end models, thanks to the money saved from travel cancellations and concerns over ruble performance in the global market," Counterpoint Research said.