SEOUL, Feb. 17 (Yonhap) -- While Korean independence heroes, like Ahn Jung-geun, Yoon Bong-gil and Kim Gu, are widely revered and celebrated more than 100 years after the March 1 Independence Movement against Japanese colonizers, little is known about the women who fought alongside these men.

As of 2019, which marked the 100th anniversary of the symbolic movement, there were only 470 women activists who had been awarded for their contribution to the country's independence from the 1910-45 Japanese colonial rule. This was 3 percent of some 15,825 independence fighters recognized by the government.

Painter Yun Suk-nam, often dubbed the "godmother of feminist art in Asia," embarked on a project to shed light on 22 female independence fighters whose lives had been overshadowed by their comrades, who were sometimes their husbands and fathers-in-law.

"Yun Suk-nam: Women of Resistance, Becoming Historic -- Portraits of 14 Female Independence Activists Who Quaked History" is an exhibition that puts together portraits of a total of 22 women. Portraits of 14 women are on display at Hakgojae Gallery in central Seoul, while those of eight other women fighters are available online. 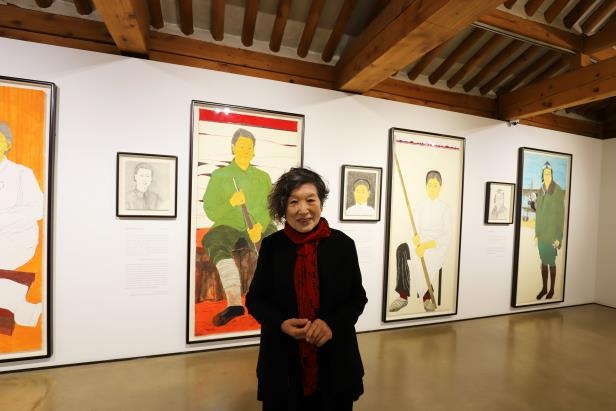 Aided by novelist Kim E-kyung and arts professor Kim Hyeon-joo at Chugye University for the Arts, the 82-year-old painter delved into the few available historical records of these women and added in her artistic imagination to depict the 22 women in vivid colors.

Yun, who started learning the traditional Korean art technique of using color pigment on traditional paper, called "hanji," 10 years ago, said she first worked on remaining photographs of the 22 women and then went through a multi-step process of sketching them in pencil, copying them on hanji of different materials and finally adding in the colors.

The result is a selection of bold and colorful paintings of these women, who sometimes pose with resolute faces and a missing finger -- Nam Ja-hyeon (1872-1933) who fought at the front lines of the independence army is known to have sent a blood-stained letter to Japanese leaders along with her severed finger -- or an educator who raises one arm in an ambitious gesture for her students.

"She couldn't have a pretty face when she was holding the remains of her husband who had died in jail. The anger must have been so huge," Yun told reporters in front of a portrait of Park Ja-hye (1895-1943), a nurse who was devoted to the independence movement alongside her famous husband, independence leader Shin Chae-ho.

While the hue and tone of each portrait varies as much as the different jobs the independence heroines had -- ranging from a pilot to an interpreter -- the painted women have one thing in common: big, rough hands.

The painter also expressed content over the bold and vivid colors the pigments created on hanji.

"In contrast to western painting, it's really difficult to mix the colors for these color pigments on hanji," said Yun, who has spent most of her artistic career using western art techniques before adopting the traditional Korean technique a decade ago. "The colors are quite strong rather than neutral. But I think they fit quite well with the direction of paintings."

The red and dark orange colors that Yun frequently used for the portraits explode in the colorful installation piece "Red Room."

Tucked inside one corner of the gallery, the 2021 work is part of Yun's "Room" series which include the "Pink Room" (1996-2018) and the "Blue Room" (2010-2018). For this piece, Yun explained that she used red paper to symbolize the blood and aspiration of the women independence activists.

The installation is a striking contrast to hundreds of paper collages and scores of mirrors that cover three walls of the exhibition space. For the paper collages, Yun simplified images into iconographies and carved them out using a knife and attached two sheets of hanji to make the colored patterns.

In front of the colored walls are 50 white wooden sculptures that are abstract portraits of the women activists. While the jagged edges symbolize the harsh reality that they went through, according to Yun, their facial expressions are peaceful, like totem poles in front of villages. The room itself thus becomes a memorial space for the unsung heroines. 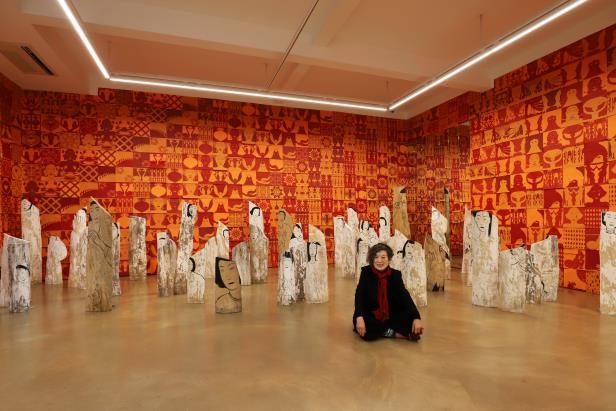 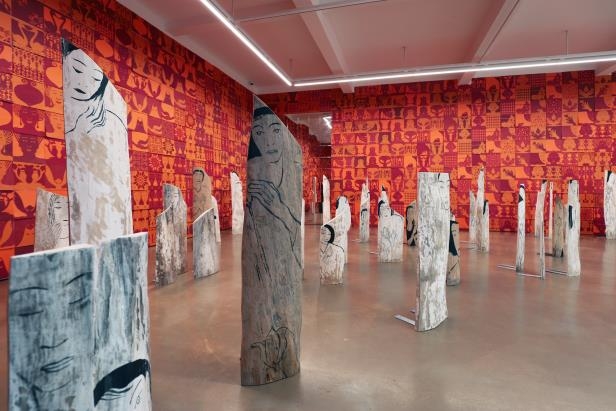 "We wondered why these women risked their lives for independence at a time when they were sometimes not even treated as human beings," Kim, the arts professor, said. "Perhaps fighting for independence was a way to actualize themselves and a road for them to have pride. It was a movement of freedom for women as well as a movement to free the nation."

The exhibition runs until April 3.