They were "members of units of the Reconnaissance General Bureau, a military intelligence agency of the Democratic People's Republic of Korea (DPRK), which engaged in criminal hacking," the Justice Department said in a press release posted on its website. 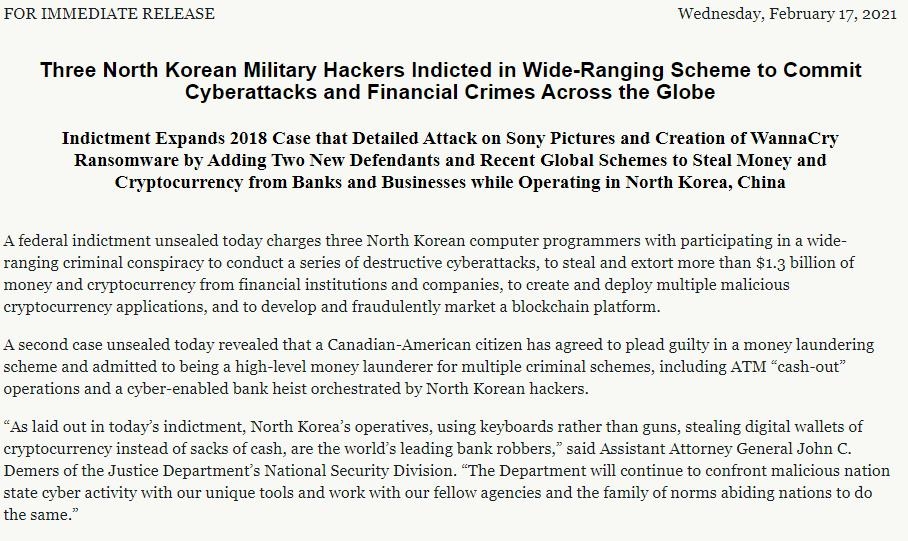 The department said the three suspects engaged in a wide array of criminal activities that sought to steal up to US$1.3 billion in cash or cryptocurrency from banks and businesses.

Their criminal activities, however, also included the 2014 attack on Sony Pictures Entertainment "in retaliation for 'The Interview,' a movie that depicted a fictional assassination of the DPRK's leader," it said.

The department said the indictment was filed on Dec. 8.

"Today's unsealed indictment expands upon the FBI's 2018 charges for the unprecedented cyberattacks conducted by the North Korean regime," FBI Deputy Director Paul Abbate said, according to the Justice Department.

"As laid out in today's indictment, North Korea's operatives, using keyboards rather than guns, stealing digital wallets of cryptocurrency instead of sacks of cash, are the world's leading bank robbers," the department quoted Assistant Attorney General John Demers as saying.

"The Department will continue to confront malicious nation state cyber activity with our unique tools and work with our fellow agencies and the family of norms abiding nations to do the same," he added.

It was not clear how much of the attempted $1.3 billion the North has actually laid its hands on, but the indictment showed the charges facing the three North Koreans included the 2018 theft of $6.1 million from a bank through ATM cash-out schemes, referred to by the U.S. as "FASTCash."

The Justice Department said a separate indictment has been brought against a 37-year-old Canadian American, Ghaleb Alaumary, on charges of laundering money for the North Korean actors.

Alaumary has admitted to being a conspirator in multiple criminal schemes, including ATM cash-out operations, and agreed to plead guilty, the department said.