The 2021 National Brand Up Exhibition, co-organized by the nongovernmental organization Voluntary Agency Network of Korea (VANK) and Yonhap News Agency, South Korea's key newswire, will continue through Feb. 25 under the theme of Korea's friend ASEAN and ASEAN's friend Korea.

This year's exhibition, the 10th of its kind, will be held online (www.brandupkorea.kr) for the first time due to the coronavirus pandemic.

In the exhibition, visitors can also see the activities of young Koreans who are promoting the history and culture of Korea and ASEAN countries, which are not well known to the world.

"With the eyes and ears of people around the world focused on ASEAN, the important thing for Korean youths to do is to become the most attractive friend for them," VANK head Park Ki-tae said in a congratulatory message.

Yonhap News CEO Cho Sung-boo said in his video message that this exhibition will offer an opportunity to see the traces of South Korea and VANK members promoting the long history and unique culture of ASEAN countries to the world.

"When you hear the word ASEAN, what kind of image do you think of? If images of a colony of the past, resort or developing country come to mind, it is due to distorted information and prejudices rooted in the days of imperialism in the past," he said. 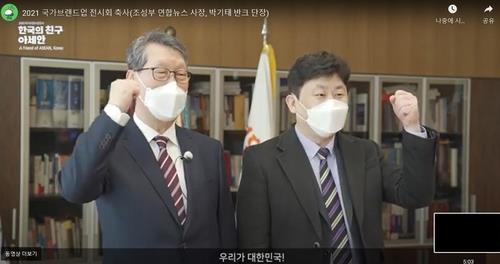 It explains Indonesia through the comparison of Yogyakarta and Gyeongju, the capital of the Silla dynasty, which has a 1,000-year history, while Cambodia will be introduced through Angkor Wat, a temple built in the early 12th century.

The exhibition highlights comparisons between King Ramkhamhaeng of Sukhothai, the ancient kingdom of Thailand, and King Sejong of the Joseon Dynasty who created Hangeul (the Korean alphabet); between Ho Chi Minh, the father of Vietnamese independence, and Korean independence fighters; between Shwedagon Pagoda, a sacred place in Myanmar and the Seokguram Grotto in Gyeongju; between Puerto-Princesa Subterranean River National Park in the Philippines and Jeju Island; and between Omar Ali Saifuddien Mosque in Brunei and Changdeok Palace in Seoul.

In particular, it emphasizes that Malaysia's Penang Bridge and Petronas Twin Towers were built with Korean technology; the Wat Phou temple in Laos is currently being restored by Korea's Cultural Heritage Administration; and the Marina Bay Sands Hotel, called the face of Singapore, was built by Ssangyong E&C, a Korean company.

In addition, exhibition visitors are able to find out about Yonhap News Agency's news on the scenes of South Korea and ASEAN becoming friends, as well as VANK's content on ASEAN history and culture and friendship between South Koreans and Southeast Asians.

Under the so-called Quiz University event, the titles of bachelor, master, and doctor, as well as gifts, will be given according to the number of correct answers to 600 questions on ASEAN.

Content of the previous nine National Brand Up Exhibition events co-hosted by VANK and Yonhap are also available at the online exhibition.

The exhibition site will soon be produced in English to help inform the world about the history and culture of Korea and ASEAN, the organizers said.