WASHINGTON, Feb. 19 (Yonhap) -- A group of U.S. lawmakers, including House Speaker Nancy Pelosi, on Friday insisted on an immediate stop to racially motivated crimes, including those targeting Asian Americans, calling them a total disgrace to the country.

The call comes amid a sharp increase in anti-Asian hate crimes.

"I always say, 'Our diversity is our strength, our unity is our power,' and we have unity on this subject. So thank you for the opportunity to salute you, and this precedent to call attention to something that must be stopped," Pelosi said in a webinar hosted by Congressional Asian Pacific American Caucus (CAPAC), led by Rep. Judy Chu (D-Calif.)

Pelosi said white supremacy is the "largest bucket of concerns" when it comes to domestic terrorism in the United States. 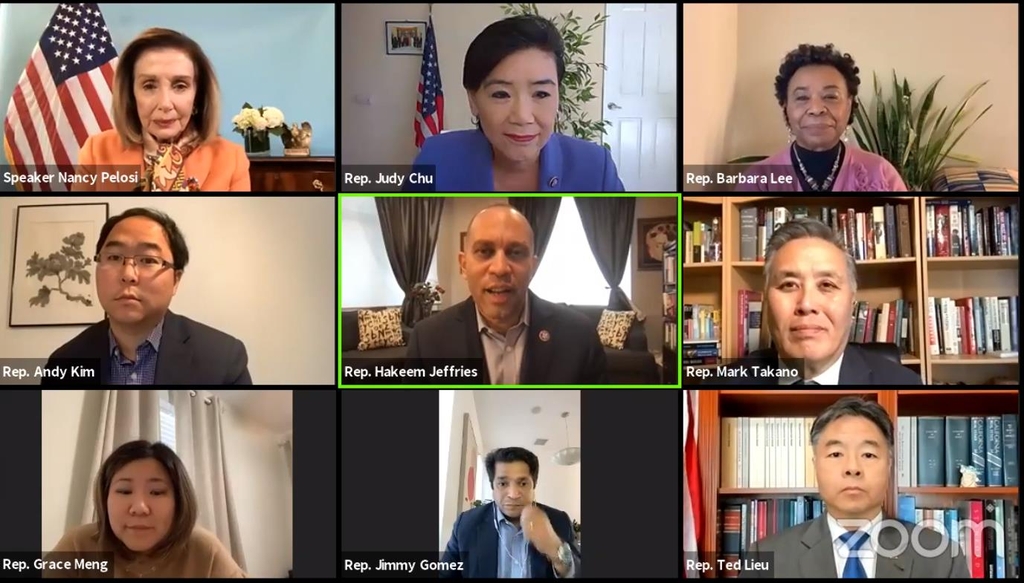 Friday's meeting, also joined by House members of the black and Hispanic caucuses, followed the fatal assault on an 84-year-old Thai man in San Francisco by a 19-year-old man in what local police later determined was a hate-driven crime.

The CAPAC said more than 3,000 anti-Asian hate incidents have been reported since the outbreak of the new coronavirus in the U.S. early last year.

Such an increase has partly been attributed to former President Donald Trump, who many believe incited public anger toward the Chinese for the COVID-19 pandemic by calling the new coronavirus a "China virus."

"All of our community leaders and we stand with the Asian American community across the country. What is happening is a complete and total disgrace. Cut it out. And we are going to make sure that those who are perpetrating this violence are prosecuted to the full extent of the law," he said at the virtual meeting.

Rep. Andy Kim of New Jersey underscored the need for a whole-of-nation approach to address the issue, saying, "This problem cannot be addressed by any single level of government."

"I am certainly very proud that the Biden administration moved forward with the executive memorandum. That is a start. It's a good start, but we need to build out further, and we in Congress certainly need to take actions," he said.

President Joe Biden signed an order last month directing federal agencies to combat resentment against Asian Americans and Pacific islanders amid a rise in crimes and harassment over the virus' suspected origins in Wuhan, China.

Anti-Asian crimes a disgrace to U.S., must be stopped: U.S. lawmakers

Anti-Asian crimes a disgrace to U.S., must be stopped: U.S. lawmakers