SEOUL, Feb. 22 (Yonhap) -- The Ministry of Employment and Labor on Monday announced a decision to establish a new government body in charge of investigating fatal and serious industrial disasters, ahead of the enforcement of a new law aimed at increasing the punishment of business owners for on-duty deaths and employee injuries.

In a report to the National Assembly, the ministry said it will establish the Occupational Safety and Health Headquarters within its organization this year before spinning it off as an independent administration later, possibly in 2023, as part of its efforts to reduce industrial disasters.

The move came after the National Assembly on Jan. 8 passed a landmark bill calling for strengthening the punishment of business owners and CEOs in the event of on-duty deaths or other serious workplace disasters. 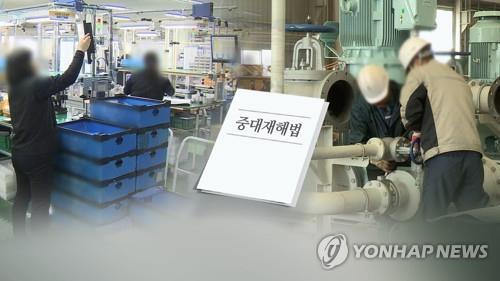 Under the new legislation, simply known as the severe disaster law, business owners or CEOs are subject to at least one year in prison or up to 1 billion won (US$915,080) in fines in the event of deadly on-duty disasters caused by lax workplace safety measures.

The new law, however, doesn't apply to businesses with fewer than five workers, while giving a three-year grace period to firms with fewer than 50 employees after it goes into effect in early 2022.

The ministry said the new government body, scheduled to be launched sometime after January 2023, will be in charge of investigating violators of the severe disaster law.

In time for the implementation of the new law in January next year, the ministry plans to increase the number of industrial safety supervisors who double as special judicial police officers.

The ministry also said it will concentrate on strengthening its supervision over risk factors of industrial accidents at workplaces.

Gov't to set up new investigative body for industrial disasters

Gov't to set up new investigative body for industrial disasters