WASHINGTON, Feb. 22 (Yonhap) -- The United States will continue to build on its multilateral dialogue in the Indo-Pacific, known as the Quad, to face many challenges in the region, including China, a spokesman for the U.S. State Department said Monday.

Ned Price also said the Quad will play a central role in the region.

"When it comes to the Quad...it's an example of the United States and some of our closest partners pulling together for the good of a free and open Indo-Pacific," the department spokesman told a press briefing.

"So we'll build on it by deepening cooperation on areas of traditional focus that includes maritime security, while also working closely with Quad partners to confront some of the defining challenges and even opportunities of our time. That includes COVID-19 and includes climate and includes democratic resilience," he added. 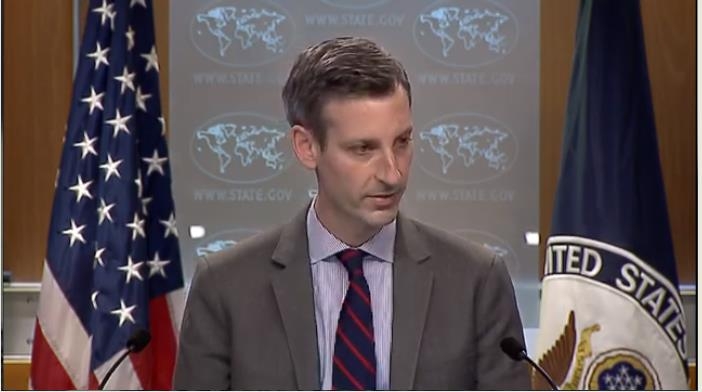 The remarks came after U.S. Secretary of State Antony Blinken took part in his first ministerial talks with his counterparts from other Quad countries -- Australia, Japan and India -- in which the top U.S. diplomat agreed to hold ministerial talks at least once a year.

"Secretary Blinken had the opportunity last week to confer for the first time with his Quad counterparts. I suspect you will be seeing Secretary Blinken continue to do that in the weeks and months ahead, given the central role of the Quad going forward," said Price.

He added one of the central roles of the Quad would be to deal with China.

"We will continue to stand up for our democratic values when human rights are being violated in Xinjiang or elsewhere in China, or when autonomy is being trampled in Hong Kong," said the spokesman.

U.S. will build on 'Quad' to deal with China: State Dept.

U.S. will build on 'Quad' to deal with China: State Dept.