SEOUL, Feb. 23 (Yonhap) -- A North Korean man was caught on military surveillance cameras along the east coast 10 times after he swam ashore in the South last week, but soldiers failed to notice eight of them even after alarm bells rang, the Joint Chiefs of Staff (JCS) said Tuesday.

The announcement was a key point of the results of the JCS' weeklong probe into the Feb. 16 incident. The North Korean man was ultimately captured more than six hours later inside a restricted area north of the Civilian Control Line in the eastern border town of Goseong.

He has expressed his desire to defect.

According to the probe, the man is believed to have swum in the East Sea overnight wearing a hard-hat diving suit. Upon arrival near an observatory in the South at around 1:05 a.m., he passed through a drainage conduit beneath the barbed wire fences set up along the shore.

The point where he came ashore is some 3.2 kilometers away from the Military Demarcation Line, and his diving suit and a set of fins were found there, the JCS said.

The man then moved along a road undetected for more than 5 km until around 4:16 a.m., when guard soldiers found him through a CCTV camera and reported the case to their superiors. After a three-hour manhunt, the military took him into custody at 7:27 a.m. 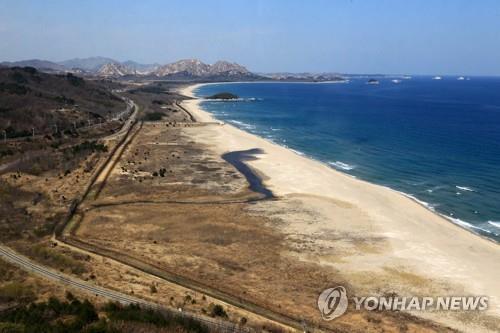 After arriving at the coast, the man was caught on the coastal surveillance cameras five times between 1:05 and 1:38 a.m., and the system rang an alarm twice. But guard soldiers missed those signs and no actions were taken.

At around 4 a.m., military CCTVs set up along ground fences also caught the man three times, but no warning bell rang, allowing the man to continue to move south.

"Service members in charge of the guard duty failed to abide by due procedures and failed to detect the unidentified man," a JCS official said.

The soldier in charge of monitoring the coastal surveillance equipment was adjusting the computer system at that time and ignored the warning signs as system errors, and the other one was on a work-related phone call with another base member, he added.

The drainage conduit the man passed through also had not been checked, as the military had not even been aware of its existence.

In July last year, the authorities ordered all coast guard units to check on barriers inside drainage tunnels, after a North Korean defector returned to the North by passing through such a waterway on the western border. The check was supposed to be done by August.

"Over the course of the investigation, we've found three drainage tunnels, which are not on our list," the officer said. They seem to have been made while building a railway nearby, and guard soldiers have not checked those areas in part for safety concerns as there are many unidentified materials there washed away from the North.

"The tunnel he went through was believed to have been damaged even before his passage," the officer added. 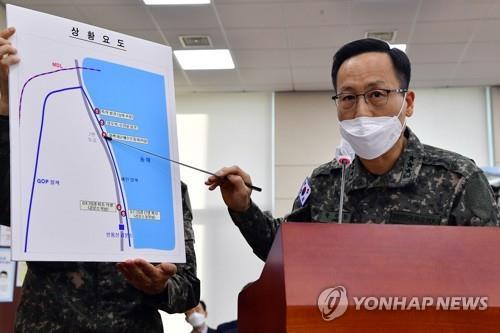 The JCS stuck to its earlier assessment that the man crossed the border by swimming, even though questions have arisen over whether it's possible to be in waters for hours in winter.

"He presumably had swum for about six hours, wearing a padded jacket inside a diving suit and fins. His clothing appeared to have kept him warm and allowed him to stay afloat," another JCS officer said. "The tidal current at that time also helped him come south."

The JCS refused to reveal his identification, including where he is from, while simply saying that he is a civilian, working in the fishing industry so that he is "quite familiar" with the sea. Sources say he is in his 20s, and no evidence of espionage has been found so far.

At the time of discovery, he was lying on the ground near a road. He was wearing the jacket, covering his lower body with fallen leaves, and was almost dry. He had hung his face mask on a tree next to him, according to the JCS.

Asked why the North Korean man did not turn himself in to the authorities, Defense Minister Suh Wook told lawmakers that the man thought he could be returned home if he approached the military.

"He said (during the investigation) that he was trying to reach civilians," Suh told the National Assembly's defense committee session. "He also may have thought that he could be shot by armed soldiers."

In the wake of the security lapse, the JCS vowed to strive to tighten discipline and supplement the surveillance system along the border.

"Based upon the probe results, the defense ministry is deliberating who will be held responsible for the case," the JCS official said.

The authorities are also reviewing the overall formation and the management of its equipment and personnel of the Army's 22nd Division in charge of the east coast region to prevent any recurrence, he added.

The military has come under fire for a series of security breach cases. In November, a North Korean civilian was captured hours after he crossed the inter-Korean border by jumping over barbed wire fences in Goseong in a suspected defection attempt. 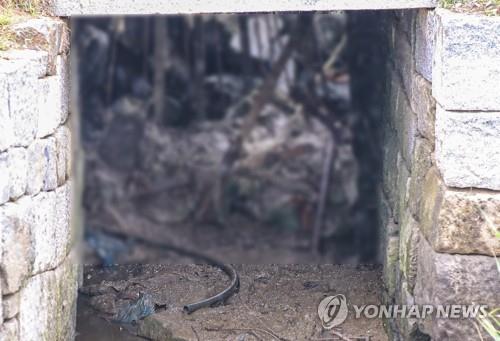