According to an annual survey on 8,336 adults by the Korea Institute of Public Administration (KIPA) from September to October of last year, people rated their happiness at an average of 6.4 points on a 10-point scale, down 0.1 point from the previous year.

In particular, the percentage of those who said they were "very happy" plunged to 1.5 percent from 4.2 percent over the same period.

The respondents felt less secure about their economic situations as well.

The survey also found that the pandemic exacerbated the welfare states of women, young adults, the elderly and low-income citizens.

The average happiness score for women fell 0.3 point to 6.4 points from the previous year, while men's happiness level remained unchanged at 6.4 points.

It also fell sharply among households with low incomes. The figure in households that earn less than 3 million won (US$2,700) per month stood at 6.0 points last year, down by 0.2 point from the previous year.

In contrast, the level of happiness in households with a monthly income of 5 million won or more stayed put at 6.6 points for the second consecutive year.

In terms of economic stability, those aged between 19 and 29 showed the lowest score of 4.5 points last year, followed by 60 years old or above with 4.6 points, a 0.3 point and 0.4 point drop, respectively, from before COVID-19. The rest of the age brackets showed little or no difference in numbers.

"As the study shows, we need to have policies put in place, which are tailored to different social groups, to mitigate social risks (from the pandemic)," Song Jin-mi, a researcher at KIPA, said.

"It will become more important to have safety nets and infrastructure to guarantee people's basic level of living," she emphasized. 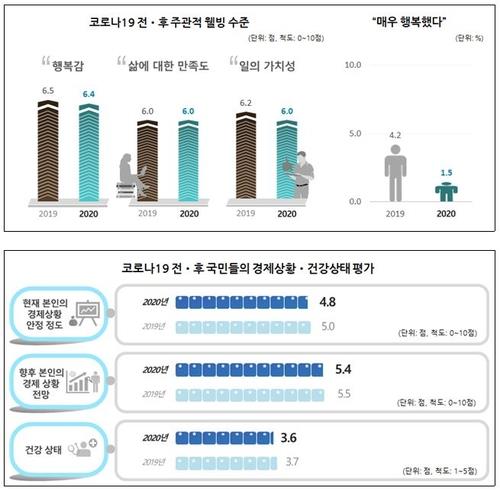 Despite the slump in general welfare amid the pandemic, the respondents were found to have more positive views about the country and the government.

In response to the statement, "I am proud of being Korean," people gave an average of 3.1 points out of 4. The figure rose by 0.2 from a year ago and marked the highest since the annual survey started in 2013.

The level of satisfaction the respondents felt about the country's politics, economy and democracy has all reached record highs since 2013, with 4.5, 4.4 and 5.7 out of 10, respectively.

The social tolerance level for minorities, including the LGBTQ population, North Korean defectors and immigrants, has also improved.

The percentage of those who said they cannot accept LGBTQ as part of the community slipped by 0.1 percentage point to 57 percent, while the same answer for defectors dropped to 18.3 percent from 25.5 percent from a year ago.