The Gyeonggi Nambu Police Agency said the suspects from Russia, Uzbekistan and Kazakhstan were detained on charges of beating and injuring two migrant workers in Hwaseong, about 40 kilometers south of Seoul, on Feb. 8.

The offenders blocked and smashed the victims' car on the road at around 4:50 p.m. and kicked and struck them with blunt weapons dozens of times, according to the police.

The victims, day laborers from Russia and Ukraine, were treated in hospital for contusions.

The cruel attack was recorded on the dashboard camera of another car parked on the road and the footage spread online, sparking public outrage. 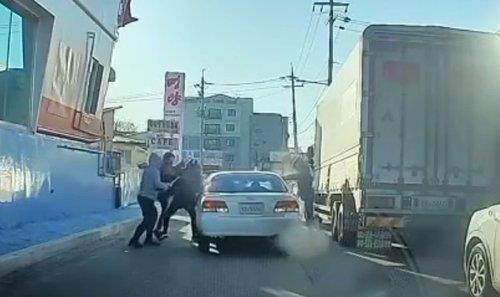 Police had nabbed 10 people in the case in the nearby cities of Pyeongtaek and Incheon as of last Wednesday.

Nine people directly involved in the violence were arrested and another suspected of helping them flee has been probed without detention, police said.

An Uzbekistani suspect told police that he was punished for assaulting one of the victims in the past and tried to get revenge for the incident, according to officials.

The police are also probing their possible involvement in narcotics crime as another suspect testified that the victims took away their drugs.

The police referred six of the suspects to the prosecution Friday and will send three others on Thursday.