SEOUL, Feb. 23 (Yonhap) -- A growing number of K-pop stars have been embroiled in school violence accusations raised by their purported victims of bullying during their school days, informed officials said Tuesday.

The recent series of school bullying accusations against celebrities have surfaced after twin sister pro volleyball stars -- Lee Jae-yeong and Lee Da-yeong -- were indefinitely suspended by their team last week over allegations that they had physically, verbally and emotionally abused their teammates during their middle school days. 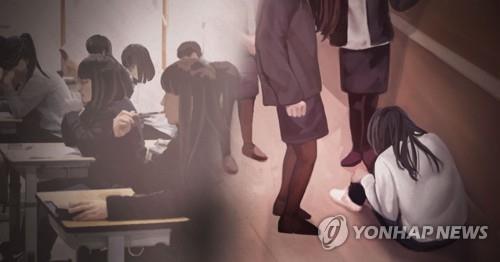 Some members of popular K-pop idol groups have been hit particularly hard by school violence accusations popping up in various online communities and social media. Those accusations have been met by outright denials or threats of legal action by the concerned entertainment agencies.

As many as 10 idol group stars were accused this week of being involved in bullying during their school days.

On Monday, an anonymous netizen claiming to be a former schoolmate of Hyunjin, a member of K-pop boy group Stray Kids, wrote in an online community that he had suffered verbal abuse and sexual harassment from Hyunjin in the past.

Then, Stray Kids' agency, JYP Entertainment, announced a willingness to clarify the exact and undistorted facts by investigating the netizen's allegations in detail through various methods.

The agency said it was listening to other former schoolmates of Hyunjin and his acquaintances, including the concerned netizen, but vowed to take legal action against anybody who intentionally creates and posts malicious rumors.

Starship Entertainment, the agency for boy group Monsta X, is dealing with an allegation that group member Kihyun extorted money from his schoolmates and sent them on an errand to buy cigarettes.

The agency said it has been trying to contact anybody involved in the allegations, including former school teachers, after realizing the seriousness of the matter. It then stressed that posts with the same content were circulated online twice in 2015 and this year, but they were confirmed to be false.

Chuu, a member of girl group Loona, was also accused of bullying one of her schoolmates, but her agency BlockBerry Creative denied the accusations, saying they contain content different from the facts.

The company said it will take all possible action against distributors of content that damages the artist's image and reputation.

In addition, Aisha of girl group Everglow and Sunwoo of boy group The Boyz came under accusations of school violence, but their agencies dismissed them as groundless.

Industry experts say allegations of school violence by themselves can inflict huge damage to the popular image of idol singers, as idol fandom actively consumes their good-hearted and sincere images as much as their dance and singing skills.