WASHINGTON, Feb. 23 (Yonhap) -- The United States and South Korea may discuss the proposed release of Iranian funds held in South Korea, but no money has yet been transferred, a State Department spokesman said Tuesday, noting the allies often discuss such issues.

Ned Price said it would not be a surprise if the allies are already in such discussions, but noted no money has been transferred yet.

"We don't have a comment precisely on that, precisely because there has been no transfer of funds," the department official told a press briefing when asked if Seoul and Washington were in discussions over the possible transfer of Iranian funds held in South Korea. 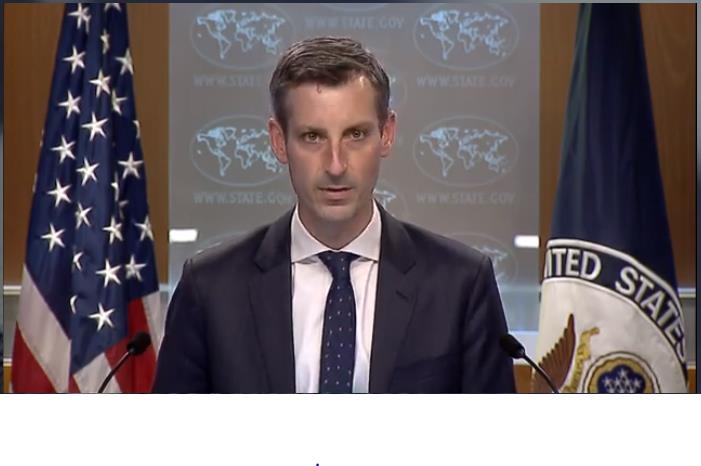 The remarks come after Seoul said it may unfreeze the Iranian funds following its consultations with the U.S.

About US$7 billion in Iranian funds have been frozen at South Korean banks due to the U.S. sanctions on the Mideast country that went into effect when Washington withdrew from its multilateral nuclear deal with Tehran, called the Joint Comprehensive Plan of Action, in May 2018.

Iran has been pressuring South Korea to unblock the money since, and its demand amplified when it seized a South Korean tanker, along with its 20 crew members, off its coast last month.

Tehran insisted its seizure of the tanker had nothing to do with its demand for the transfer of the frozen funds, but announced this week that Seoul has agreed to unblock the money and transfer $1 billion as an initial step.

Seoul later confirmed the countries have reached an agreement on where the money will be used, but said any release of funds will only follow U.S. consent.

Price refused to confirm any ongoing consultations between Seoul and Washington, but said Seoul is one of the closest U.S. allies and partners when it comes to sanctions enforcement.

"The Republic of Korea -- a key ally, key treaty ally -- is very much a partner when it comes to sanctions enforcement across the board," said the department spokesman.

"So it wouldn't be a surprise, wouldn't come as a shock, I am sure, to hear you say that we do discuss these issues broadly with the South Koreans," he added.