The scale of the government's proposal for the new batch of pandemic relief fund has been tentatively set at around 19.5 trillion won, but the final amount could rise further during the National Assembly's review of the related bill, Rep. Yoo Dong-soo, a deputy chief of the DP's policy committee, indicated.

"(The size of the fourth relief fund) will be 19.5 trillion won plus some more," Yoo told reporters at the National Assembly.

"(19.5 trillion won) is what the government submits to parliament, and the National Assembly will have separate deliberations (to fix the final amount)," Yoo noted, indicating a possible increase in the amount.

"The National Assembly would by no means leave the government proposal unchanged," he said.

Asked whether the extra government spending would require the issuance of 15 trillion won worth of state bonds, Yoo said it will be less than the amount.

According to party officials, the DP and the government will hold a high-level meeting Sunday to fix the final size of the fourth disaster relief assistance, as well as the related extra budget bill.

In a follow-up step, the government is planning to approve the bill at a Cabinet meeting next Tuesday before submitting it to the National Assembly for approval two days later.

During the Sunday meeting, the two sides will also discuss a separate plan to compensate small businesses and self-employed people ordered to close or cut down operations as part of state social distancing rules to fight the COVID-19 pandemic.

Through the previous three rounds of COVID-19 relief funds, South Korea has distributed a total of 31.4 trillion won to small businesses and other vulnerable people hit by the brunt of the pandemic. This also included a total of 14.3 trillion won worth of stimulus checks given to all households in May.

After getting the parliamentary nod for the new round of relief assistance, the government is expected to begin providing them to help small businesses and other vulnerable people ride out the economic difficulties wrought by the pandemic. 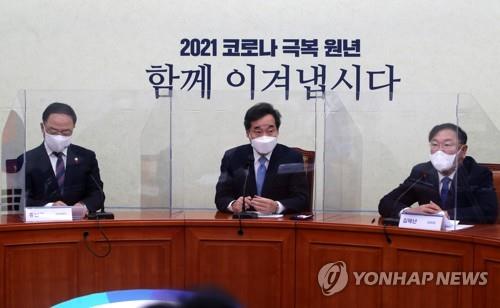