SEOUL, Feb. 25 (Yonhap) -- Leading experts on North Korea underscored the need Thursday to address Pyongyang's human rights issues should Washington engage in talks on the normalization of relations between the two countries.

Speaking at a virtual forum on peace efforts on the Korean Peninsula, Robert Gallucci, former U.S. nuclear negotiator, and Victor Cha, Korea chair at the Center for Strategic and International Studies, made the point, as the administration of U.S. President Joe Biden is intent on reasserting America's role in promoting liberal values like democracy and human rights.

"The human rights issue is not only a humanitarian issue, but it is also a matter of what's required for normal relations," Gallucci, who brokered the ill-fated nuclear deal with Pyongyang in 1994, said during the forum co-hosted by the One Korea Foundation.

Gallucci's remarks served as a reminder that the North's abject human rights records could get in the way of efforts to denuclearize it, end its decades-old hostility with the U.S. and open normal political and diplomatic relations between the two countries.

The sensitive issue has apparently been left on the backburner over the last four years, as both Seoul and Washington sought to sustain diplomacy with Pyongyang and tackle its evolving nuclear and missile threats first.

Cha pointed out that if the U.S. broaches the human rights issue in dialogue with the North, this would rather indicate Washington's seriousness about its dialogue with the reclusive country rather than an intent to derail engagement. 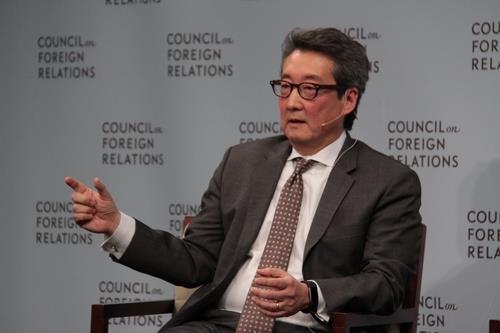 "The president can tell Coca Cola tomorrow to go and open a plant in North Korea, and they cannot do it because it is a violation of sanctions because of human rights violations along the supply chains," he noted.

For the Biden administration currently reviewing its policy toward North Korea, Cha recommended a set of principles -- coordination with allies, denuclearization as the goal of any negotiations and management of military threats from the North among other things.