SEOUL, Feb. 26 (Yonhap) -- South Korea started its public inoculation program against the new coronavirus Friday over one year after its first confirmed case, seeking for people to return to their normal daily lives and attain herd immunity by November.

More than 5,000 health care workers and patients aged under 65 at long-term care facilities started receiving the first doses of the novel coronavirus vaccines at the start of the nationwide inoculation rollout.

Health authorities earlier announced they will not designate a specific person to get the first jab as part of the long-awaited inoculation program in the country, where COVID-19 cases are nearing 90,000.

The country's first person to get the first shot of British-Swedish pharmaceutical giant AstraZeneca and Oxford University's full two-dose regimen was a 61-year-old health care worker from a nursing facility in Seoul. 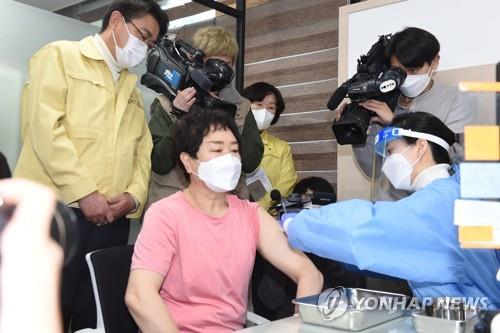 The nationwide distribution of AstraZeneca's vaccines began Thursday for some 289,000 health care workers and patients aged under 65 at sanatoriums, nursing facilities and rehabilitation facilities. The first vaccinations will be completed in March, according to health authorities.

The first batch of AstraZeneca bottles are enough to provide jabs to 785,000 people. The vaccine doses were produced at a local plant by SK Bioscience Co. under a manufacturing partnership deal.

AstraZeneca's vaccines will be delivered to a total of 1,900 long-term care hospitals and public health centers across the country for the next four days.

Starting Saturday, the first group of some 55,000 medical workers at hospitals for virus patients will receive Pfizer vaccines, which are part of the World Health Organization's global vaccine COVAX Facility project.

The first group includes 300 doctors, nurses and other health professionals treating COVID-19 patients in the greater Seoul area, who will receive the first jab of Pfizer vaccines at a state-run vaccination facility at the state-run National Medical Center in central Seoul, the authorities said.

Pfizer shots will then be administered at four other state-run vaccination facilities. The authorities plan to build 120 such facilities at general hospitals, gymnasiums and other kinds of government sites.

Health authorities have repeatedly dispelled concerns over the safety issues surrounding AstraZeneca's vaccine, after the government's decision to temporarily exclude its administration to people aged 65 or older until it receives additional clinical trial data.

They pointed out that the product was approved by some 50 countries and by the World Health Organization for emergency use and that there have been no reports of serious side effects from countries that have begun using them. 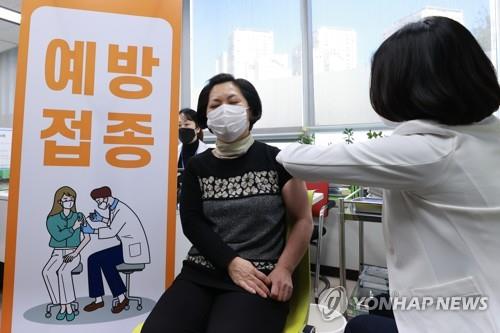 Controversies arose globally over the use of AstraZeneca's vaccine for seniors as there is not enough data to back its efficacy in older people. Several countries either excluded or postponed inoculating seniors with the product.

Health authorities also have said the government will provide adequate compensation for serious side or adverse effects from the scheduled shots. The government will also cover costs for hospital stays and other kinds of treatment costs.

The rollout comes at a critical time as the country strives to curb the virus spread. The country's daily new coronavirus cases rose slightly above 400 on Friday, raising the total caseload to 88,922.

Some health experts also showed concern over the goal, saying at least 90 percent of people should be inoculated to achieve herd immunity. 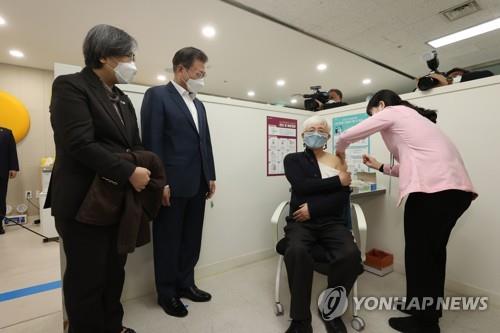