SEOUL, Feb. 25 (Yonhap) -- A parliamentary committee on Thursday approved a politically controversial bill on constructing a new airport in the southern region of the country.

The bill to build a new airport on Gadeok Island in the country's biggest port city of Busan passed through the Legislation and Judiciary Committee, the last legislative hurdle before it is put up for final voting at a plenary session.

The bill is part of South Korea's more than a decade-old debate on expanding air travel infrastructure in the southeast region that encompasses such prosperous cities as Busan and Ulsan.

The liberal Roh Moo-hyun administration (2003-2008) first proposed the construction project to disperse the growing air traffic to and from Gimhae International Airport in Busan, the only international airport in the region, deemed almost saturated.

The conservative Park Geun-hye government pushed for a project that would expand the existing Gimhae airport in Busan, but a state committee virtually aborted it in November after reviewing its feasibility.

Spurred by the decision, lawmakers from the ruling Democratic Party (DP) proposed constructing a new airport in Gadeok, the biggest island of Busan, and have pushed to expedite the project.

The DP, however, drew criticism for rushing the large-scale state project ahead of the April mayoral elections in Seoul and Busan.

The DP is planning to push the bill through the National Assembly's plenary session Friday, with a goal to put the envisioned airport into operation before 2030.

Meanwhile, the judiciary committee decided to review a bill on disqualifying doctors convicted of felonies on Friday following medical doctors' threat to launch a general strike if the bill was passed.

The bill to revise the Medical Service Act was originally scheduled to be reviewed by members of the Legislation and Judiciary Committee on Thursday. 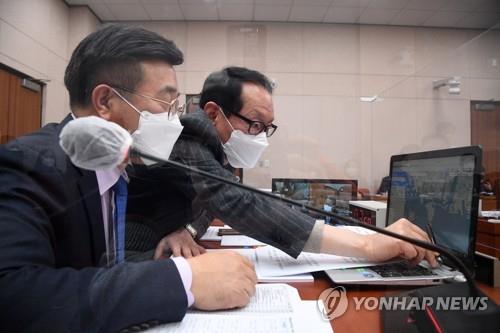