SEOUL, Feb. 26 (Yonhap) -- Shin Kyung-sook, the author of the Korean best-seller "Please Look After Mom," is set to publish a new novel next month, returning to the public eye six years after a plagiarism scandal.

Seoul-based publisher Changbi said Shin's new novel -- whose title roughly translates to "I had gone to my father" -- will be published Wednesday, followed by a press conference the following day.

"The piece ardently captures sympathy towards aging family members while restoring a father's fading life through a profound insight and reflection on life," the publisher said, adding Shin had run the novel as a series in Changbi's digital magazine.

In a post she made in the digital magazine, the veteran author said, "I would like to say I wrote this piece in the hopes of dedicating it to my father who has always and even now is standing in front of difficulties that he does not wish for, but in fact I may be writing to recover my shrunken heart." 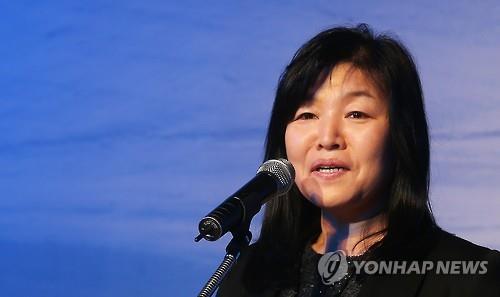 The press conference is set to mark her first public appearance since 2015, when she was accused of copying passages from the Korean translation of "Patriotism" (1961) by the late Japanese writer Yukio Mishima in one of her short stories.

Shin initially denied the claims, but Changbi issued a letter of apology under the name of its head, admitting to the plagiarisms in her short story collection, "Legend."

The veteran author who went out of the public eye following the incident first voiced her opinion on the accusation in 2019 as she released the novella with the Korean title translated as "The river doesn't know what is carried in the boat," also through Changbi.

"A major mistake took place in my writing due to a moment of carelessness during my youth and a long time had passed without remembering it," Shin said in the statement issued through her publisher. "In hindsight, my empty pride as a writer made me delay admitting that.

"As I have told myself over the past four years, I am sorry and apologize for causing concerns," she said.

While it was her first official apology following the scandal, some claimed it did not properly acknowledge the plagiarism accusations.