SEOUL, Feb. 26 (Yonhap) -- A politically controversial bill on building a new airport in the second-biggest South Korean city of Busan got the final nod from the National Assembly on Friday.

The bill nails down a multi-billion-dollar state project to build a new airport on Gadeok Island, the biggest island of Busan, to handle growing air traffic demand and facilitate prosperity in the country's southeast region.

The bill was passed in the National Assembly's plenary meeting in a 181-33 vote, with 15 abstentions.

The project is part of South Korea's more than a decade-old debate on expanding air travel infrastructure in the southeast region that encompasses such prosperous cities as Busan and Ulsan.

The liberal Roh Moo-hyun administration (2003-2008) first proposed the construction project to disperse the growing air traffic to and from Gimhae International Airport in Busan, the only international airport in the region, deemed almost saturated.

The conservative Park Geun-hye government pushed for a project that would expand the existing Gimhae airport in Busan, but a state committee under the current Moon Jae-in administration virtually aborted it in November after reviewing its feasibility.

Spurred by the decision, ruling Democratic Party lawmakers proposed constructing a new airport on Gadeok and have pushed to expedite the project, with a goal to put the airport into operation before 2030. 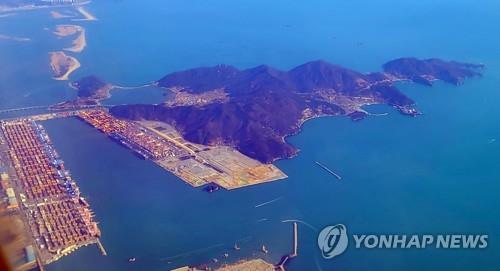 The DP, however, drew criticism from outside of the party for "unilaterally" rushing the large-scale state project in Busan ahead of the April mayoral by-elections in the port city as well as the capital Seoul.

Both mayoral seats were left vacant last year after the predecessors, both from the DP, were implicated in sexual harassment allegations. Rival parties are desperately contending for victory in the upcoming mayoral by-elections, set for April 7, regarded as a major barometer of public opinion before the 2022 presidential election.

The controversial bill came under further criticism this week following media reports that the Ministry of Land, Infrastructure and Transport in charge of state transport infrastructure projects had voiced skepticism over the Gadeok airport plan.

The ministry said in its assessment report delivered to lawmakers early this month that the construction of the airport could incur problems in terms of safety, operability, the environment and economic feasibility. The total cost of the construction could also shoot up to more than 28 trillion won (US$24.9 billion), far higher than the 7.5 trillion won suggested by the city of Busan, the report also assessed.

As a controversy arose over the report, Son Myoung-soo, the vice minister for transport, said during his parliamentary appearance Thursday that the report should not be interpreted as the ministry's objection to the airport project and the ministry will do all it can to implement the project if parliament approves it.

President Moon, accompanied by top DP leaders and the heads of key ministries, toured a candidate site for the envisioned airport Thursday as part of a broader project to build a megacity out of the southeast region, which could become on par with the greater capital area.

The trip was vehemently denounced by the main opposition People Power Party as "election meddling," with its floor leader Rep. Joo Ho-young pledging to examine whether it is in violation of the official election law, which requires those in public service, including the president, to remain politically neutral.